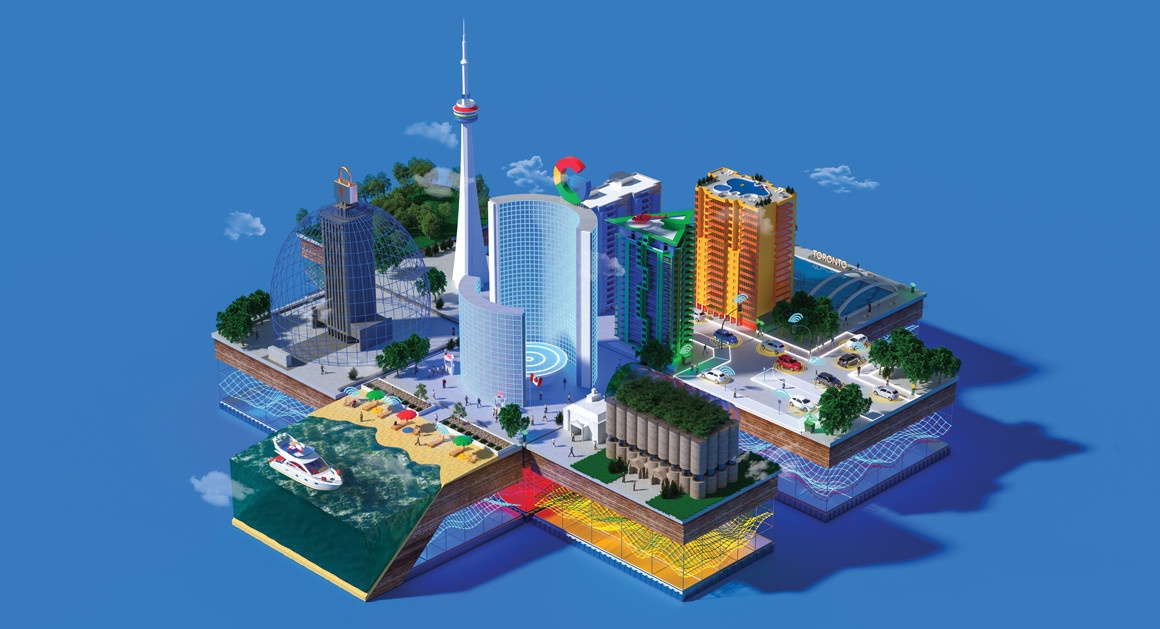 An ambitious project by Alphabet subsidiary Sidewalk Labs could reshape how we live, work, and play in urban neighborhoods.

On Toronto’s waterfront, where the eastern part of the city meets Lake Ontario, is a patchwork of cement and dirt. It’s home to plumbing and electrical supply shops, parking lots, winter boat storage, and a hulking silo built in 1943 to store soybeans—a relic of the area’s history as a shipping port.

Torontonians describe the site as blighted, underutilized, and contaminated. Alphabet’s Sidewalk Labs wants to transform it into one of the world’s most innovative city neighborhoods. It will, in the company’s vision, be a place where driverless shuttle buses replace private cars; traffic lights track the flow of pedestrians, bicyclists, and vehicles; robots transport mail and garbage via underground tunnels; and modular buildings can be expanded to accommodate growing companies and families. 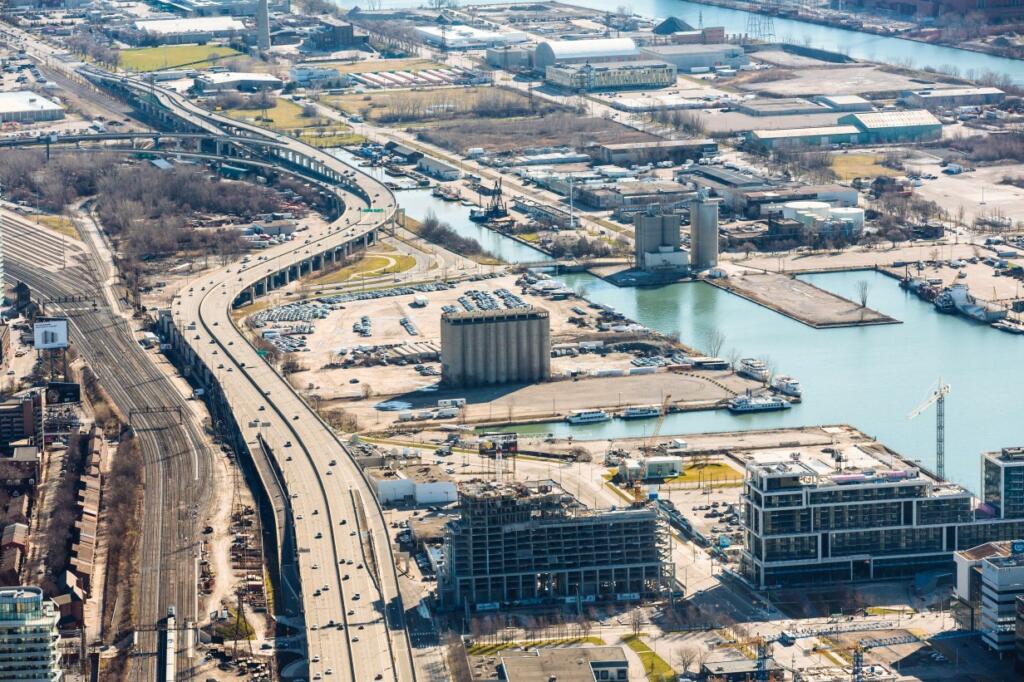 In the early 2000s, so-called smart cities were all the rage. Captivated by the idea of urban districts that would use technology to reduce energy consumption and pollution, make transportation more efficient, and lure affluent tenants, countries including China, South Korea, and the United Arab Emirates hired developers to transform large swaths of land into photogenic cities stuffed with the latest innovations.

All fell short of their lofty ambitions. Sidewalk Labs, which was founded in 2015 as a subsidiary of Alphabet to develop technology for alleviating urban problems, believes it can buck the trend by working closely with the community and tailoring the technology to local needs. “People have been trying to build the city of the future for more than 100 years,” says Rit Aggarwala, the executive in charge of Sidewalk Labs’ urban-systems planning. “But we really want to tap into [Toronto’s] existing vitality and character.”

The neighborhood, called Quayside, is Sidewalk’s first big project. It will start life on a 12-acre plot mostly owned by Waterfront Toronto—a local development agency founded by Canada’s federal, provincial, and municipal governments—and is expected to house an estimated 5,000 people. Later development could expand to a neighboring 700-plus-acre parcel of industrial waterfront and involve tens of thousands of residents. “All of our thinking and decisions on Quayside are shaped by the question ‘What do 21st-century technologies enable us to do better?’” says Aggarwala.

Driverless cars will have a big role. Sidewalk assumes they will navigate more precisely and obey traffic laws more consistently than human drivers, so it wants to put narrower lanes in Quayside and carve out more room for sidewalks and parks. In theory, using shared self-driving vehicles will mean that fewer people need to own cars, saving families a projected $6,000 a year. 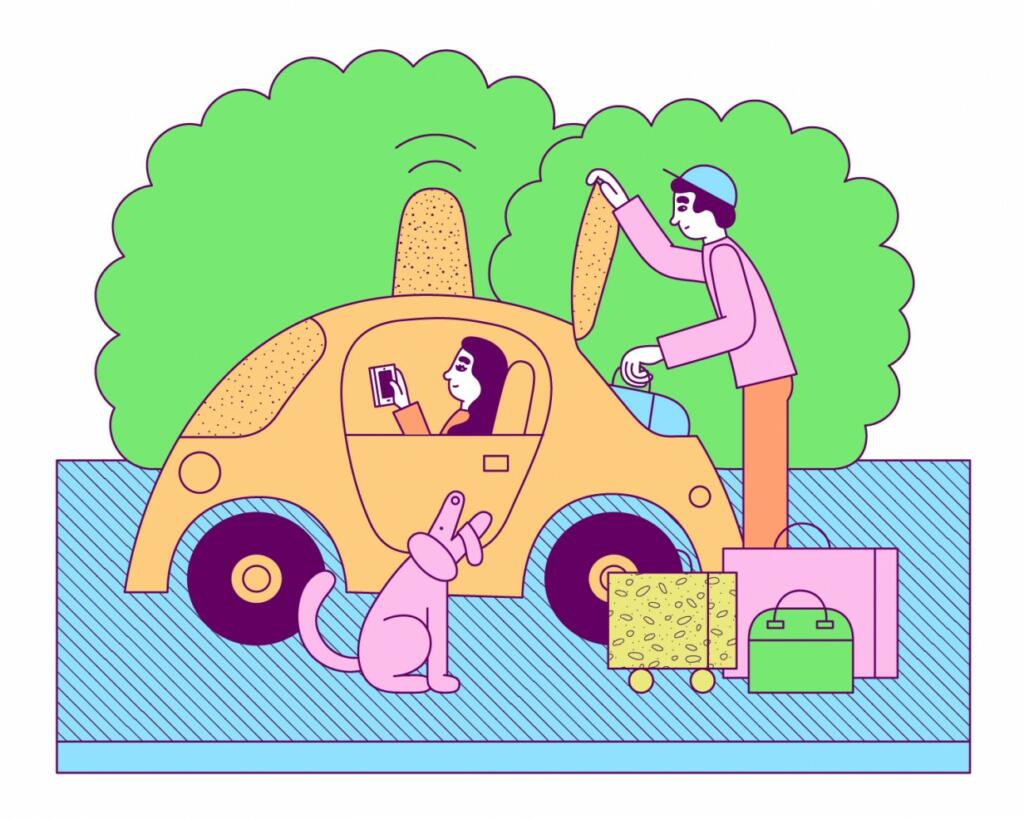 Sensing and monitoring public activity accurately and frequently will be key. Running autonomous buses on city streets requires knowing when to change lights and other signals to give cyclists and pedestrians priority.

Sidewalk Labs says the sensor information would also support long-term planning. The data would fuel a virtual model of Quayside, which urban planners could use to test infrastructure changes quickly, at low cost, and without bothering residents. It could also be stored in a shared repository that entrepreneurs and companies could draw on to make their own products and services for Quayside.

Waterfront Toronto issued a request for a partner in March 2017 and announced its choice of Sidewalk Labs in October. The two organizations now have a year to decide what technologies to deploy, which companies besides Sidewalk will provide them, and how to finance the project. Sidewalk has pledged to spend $50 million on the first phase of planning, which has already kicked off, and pilot testing, which is scheduled to begin later this year. Construction could start next year.

“If Quayside is successful, cities in Canada and elsewhere won’t have any choice but to emulate it, because it would have enormous implications in terms of sustainability and quality of life,” says Christopher De Sousa, who directs the school of urban and regional planning at Ryerson University in Toronto.

Unsurprisingly for a company spawned, in part, by technologists, Sidewalk thinks of smart cities as being rather like smartphones. It sees itself as a platform provider responsible for offering basic tools (from software that identifies available parking spots to location-based services monitoring the exact position of delivery robots), much as Google does with its smartphone operating system, Android. Details are still under discussion, but Sidewalk plans to let third parties access the data and technologies, just as developers can use Google’s and Apple’s software tools to craft apps.

In fact, Sidewalk anticipates that 80 percent of the work on Quayside will involve these third parties. Some are likely to be other Alphabet companies, such as the autonomous-vehicle maker Waymo, but Sidewalk has said that competitors such as the ride-hailing provider Lyft would be able to operate in Quayside, too.

That will help Sidewalk tailor its products to cities around the world. “If you think of the city as a platform and design in the ability for people to change it as quickly as you and I can customize our iPhones, you make it authentic because it doesn’t just reflect a central plan,” Aggarwala says. “It also reflects the people who live and work there.” 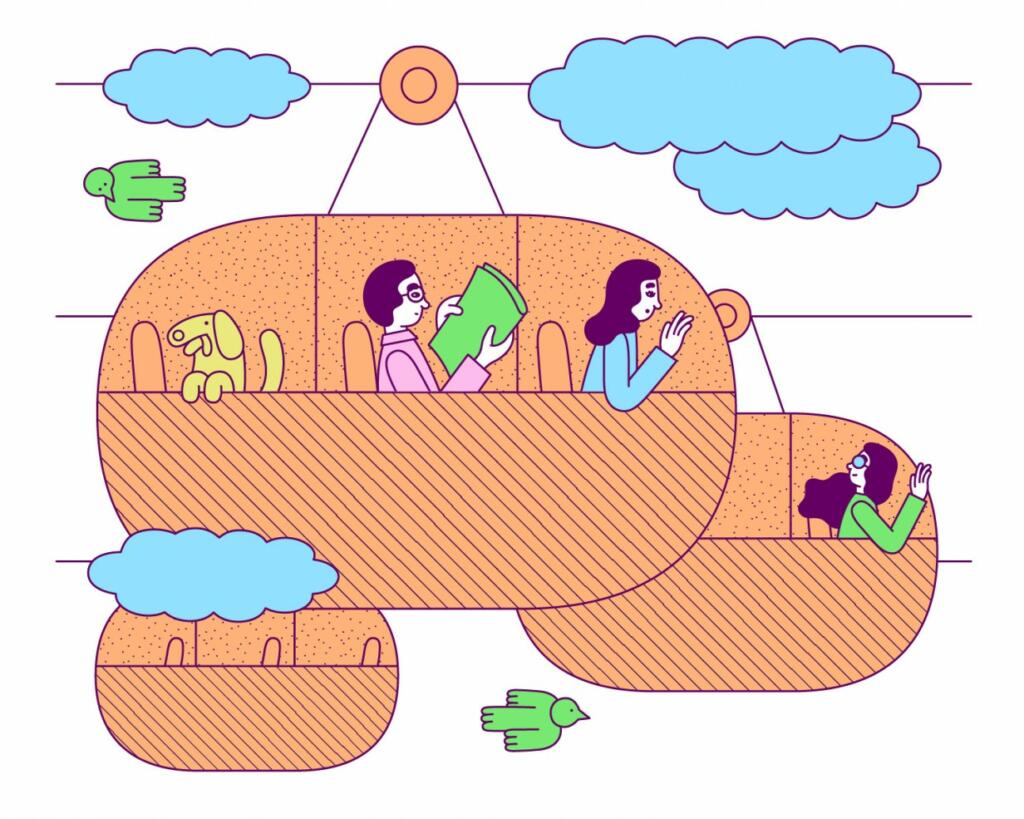 One way Sidewalk Labs differs from Google and Android is the way it plans to make money. The startup is still figuring out its business model, but it has said it expects to license the technology it produces for Quayside to other cities, rather than compile consumer data and use it to sell ads. Still, many people are worried about privacy given the data Quayside plans to harvest. In recent months, Canadian newspapers and blogs have published a number of skeptical articles, including a list of more than 35 probing questions about Sidewalk Labs’ business model and data governance methods.

Most of the scrutiny relates to the company’s plan to install sensors across Quayside to measure everything from building occupancy to sewage flow rates to how often a public waste bin is used. The company is also devising a system that would give Quayside residents and workers a quick way to pay for things and gain access to services, similar to the way people can buy products off Amazon with a single click or get billed for Uber rides through an app.

Though Sidewalk Labs says the data would be used for a community purpose, such as giving transit discounts to low-income residents, regulating building temperatures, and keeping trash cans from overflowing, not everyone is convinced. “There are definitely questions about whether Sidewalk Labs will try to make money by tracking people’s daily interactions,” says David Roberts, who studies cities at the University of Toronto. “What data will be collected, how personal will it be, how will it be used, and who will have access to it?”

Aggarwala says Sidewalk will gather only the data needed to solve the problem at hand. If the company wanted to analyze pedestrian patterns in Quayside, it could employ a lidar device, which uses light from a laser to detect objects; or a camera with very low resolution; or one that counts people who walk by but doesn’t store the images. “That way you can capture the information you need but not anything that can be traced back to an individual,” he says. “I think if we can do that and demonstrate how that can improve urban life, then people will be comfortable and give us the license to do it.”