BUILDING THE PERFECT ANDROID FRANKENPHONE: THE BEST PARTS OF THE BEST PHONES OF THE YEAR 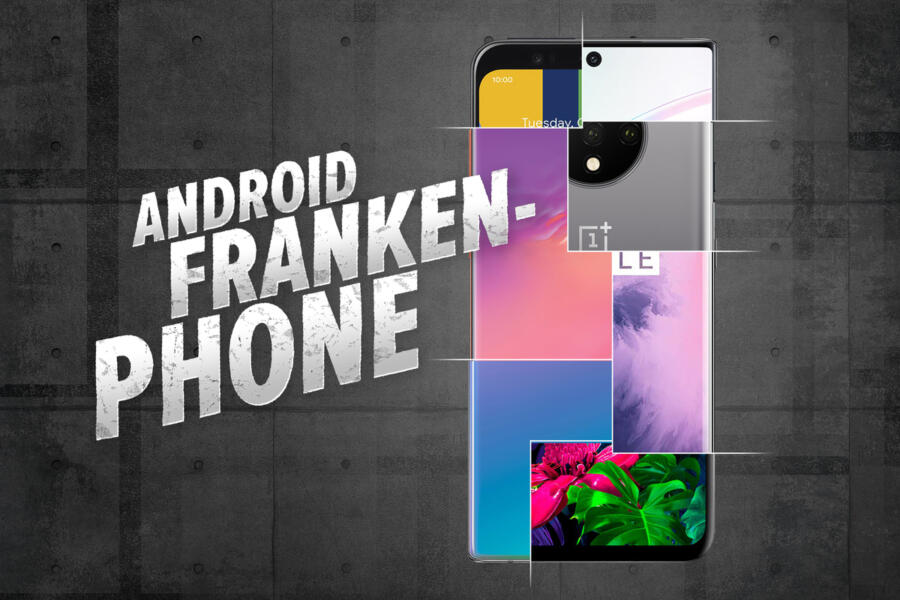 Android phones didn’t just break the bank in 2019, they also broke speed, photography, and display records. Samsung and OnePlus delivered handsets that were as groundbreaking as they were gorgeous; Google pushed the limits of smartphone photography; and LG continued to march to its own drum, crafting some truly unique beats along the way.
But for all their strengths, there’s no perfect Android phone. So this year, I decided to build one. Well, on paper. Without further ado, here’s the 2019 Android Frankenphone, built using the best parts of the best phones of the year. 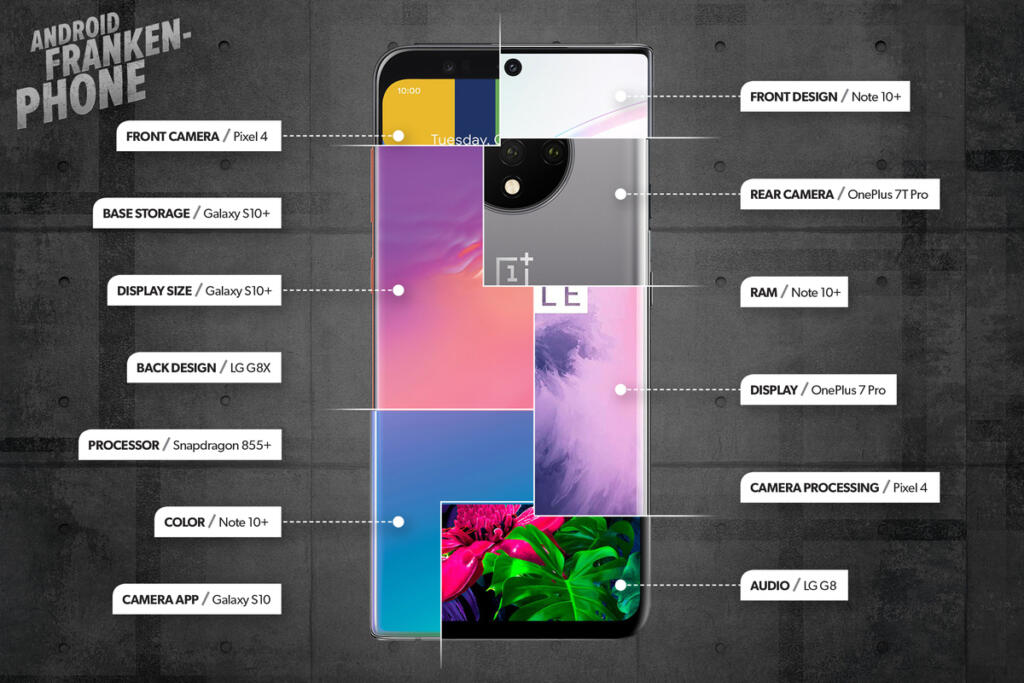 You can build a killer Android phone with a piece of every great handset released in 2019.

You can’t have a great phone without a great display, and the OnePlus 7 Pro had it this year—even better than the the Galaxy S10+ and Note 10+. Samsung might supply the display OnePlus uses, but the 7 Pro does it better. Why? Because of its 90Hz refresh rate, which makes scrolling super speedy. It’s not just that the 7 Pro is one of only a handful of phones that offer a refresh rate higher that 60Hz, it’s that OnePlus has delivered it in a display that’s so perfect, it’s like a cherry on top. And now it’s Samsung that needs to do the catching up. 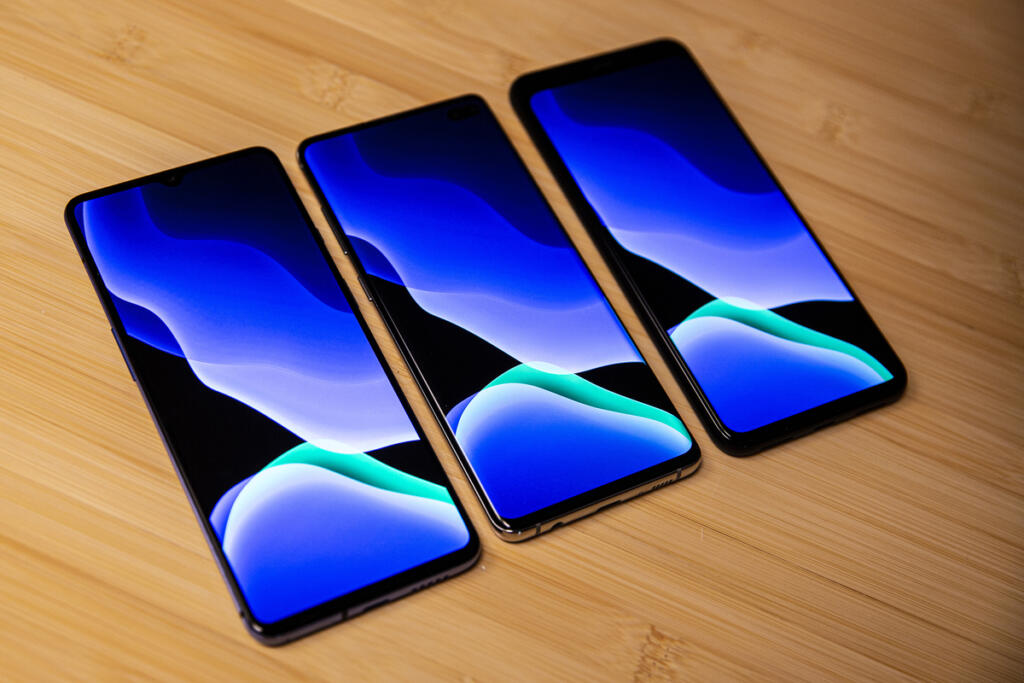 The Galaxy S10+ (center) hits the sweet spot when it comes to screen size.
While the OnePlus 7 Pro has the best display, it’s a little too big for my tastes. At 6.7 inches, it’s one of the biggest phones ever made and pretty much impossible to use with one hand. But at 6.4 inches, the Galaxy S10+, is basically the Baby Bear of phones: just right. It’s smaller than the Note 10+ and the iPhone 11 Pro Max, and easily fits in my pocket, yet it’s still big enough to get serious work done.

The biggest story of 2019 was the ever-shrinking bezel, and the race to the first full-screen phone is truly underway. But until we get there, the Note 10+ is the phone that does itty-bitty bezels best. Its camera cutout is centered (unlike in the Galaxy S10+) and its receiver is the tiniest of holes along the top edge. The rounded corners of the display match the rounded corners of the phone, the chin is nearly as thin as the forehead, and the side bezels are nonexistent thanks to the infinity display. Lots of phones claim to have all-screen designs, but the Note 10+ is the only one that’s actually almost there.

As the fronts of our phones have become overtaken by screens, it’s become easier to distinguish them from the backs of phones, from the Pixel 4’s square camera to the OnePlus 7T’s circular bump. But LG made the prettiest one of all, with a camera that’s entirely encased under glass. It’s the only phone with a rear case that’s completely smooth and flat, and if feels downright luxurious to hold. And it’s not too shabby to look at either. I’ve become so accustomed to bulbous bumps, and I can appreciate how the Pixel 4 and OnePlus 7T fully embrace them as part of their designs. But when I run my finger along the surface of the LG G8x and feel nothing but smooth glass, it makes all those camera bumps feel ancient. 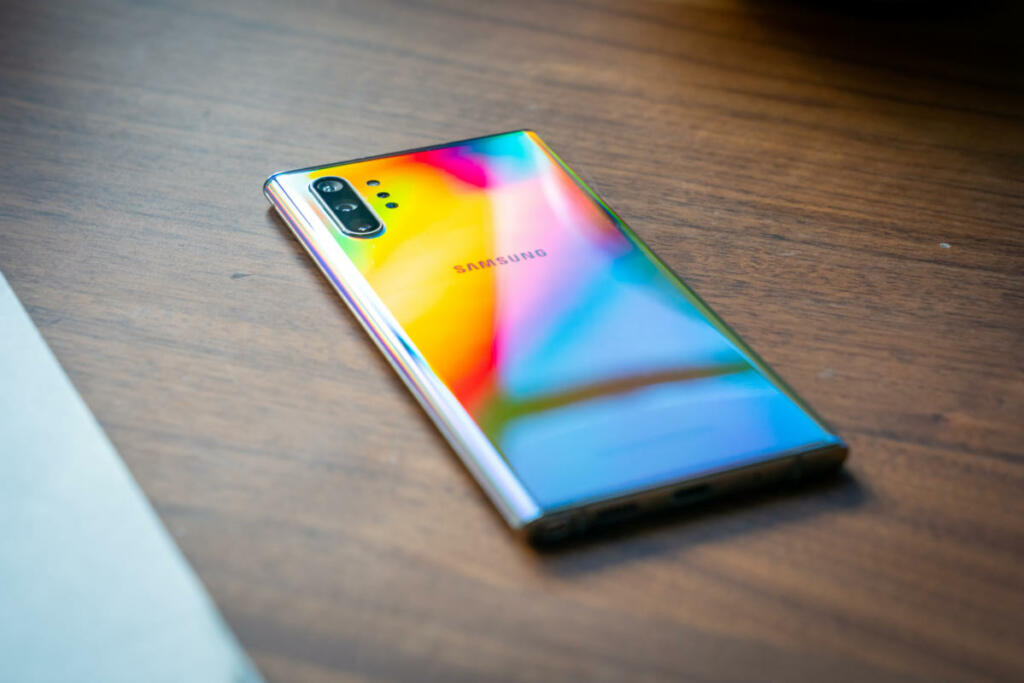 Why have one color when you can have all the colors.
A whole bunch of cool colors debuted this year including Flamingo Pink (S10), Oh So Orange (Pixel 4), Cosmic Purple (Mate 30), and Martian Green (Galaxy Fold), but my favorite is the one the captured them all: Aura Glow on the Galaxy Note 10+. A virtual chameleon that’s constantly shifting its hue as you use it, Aura Glow might be the first phone color that truly needs a clear case—or none at all.

With all due respect to the Snapdragon 855 that powers the Galaxy S10 and note 10, Google Pixel 4, LG G8, and a slew of other high-performing premium handsets, the Snapdragon 855+ in the OnePlus 7T is a little faster and a little better at rendering graphics. The extra speed is particularly noticeably with 90Hz displays, which is probably why OnePlus is one of the only phones to use it. 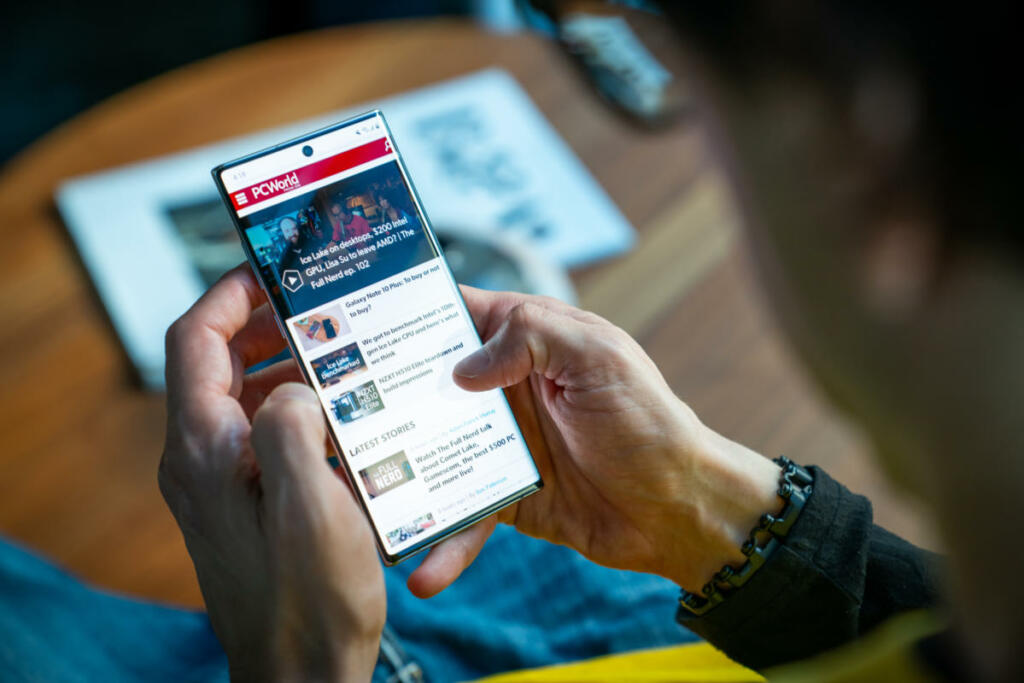 Performance on the Note 10+ is stellar thanks to its 12GB of RAM.
There was a time when I questioned whether phones needed more RAM than most Chromebooks, but the Note 10+ convinced me. With 12GB of RAM, apps launch incredibly quickly, Recents is loaded with screens, and hooking it up to a monitor via DeX doesn’t slow it down at all. I hear your groans—no phone needs that much RAM—and that may be true today. But I expect most people will keep their $1,150 phones for at least three years, and in 2022, a little extra RAM will go a long way.

The past few years have seen rapidly declining storage costs, so much so that now even Apple is offering a minimum of 64GB of space in all iPhones. But while you can get up to a terabyte of internal storage inside some phones, I’m still a bit more practical. The sweet spot is the base Galaxy S10+, with 128GB of storage and an expandable memory card slot. Its one of the few remaining phones to still feature a storage slot (even the smaller Note 10 ditched it), and like the headphone jack, I’m going to miss it when it’s gone for good.

Front cameras don’t usually get a lot of attention, but with so many selfies floating around Instagram, it’s just as important as the rear camera. They’re all very similar, but the Pixel 4 ekes out a win here. Even without the dual-cam setup of the Pixel 3, the Pixel 4’s front camera excels, with a wide 90-degree field of view, f/2.0 aperture and 8MP sensor. That’s slightly narrower than the Pixel 3’s 97-degree FOV, but wider than most other phones out there, including the dual-selfie-cam S10+, which maxes out at 80 degrees. 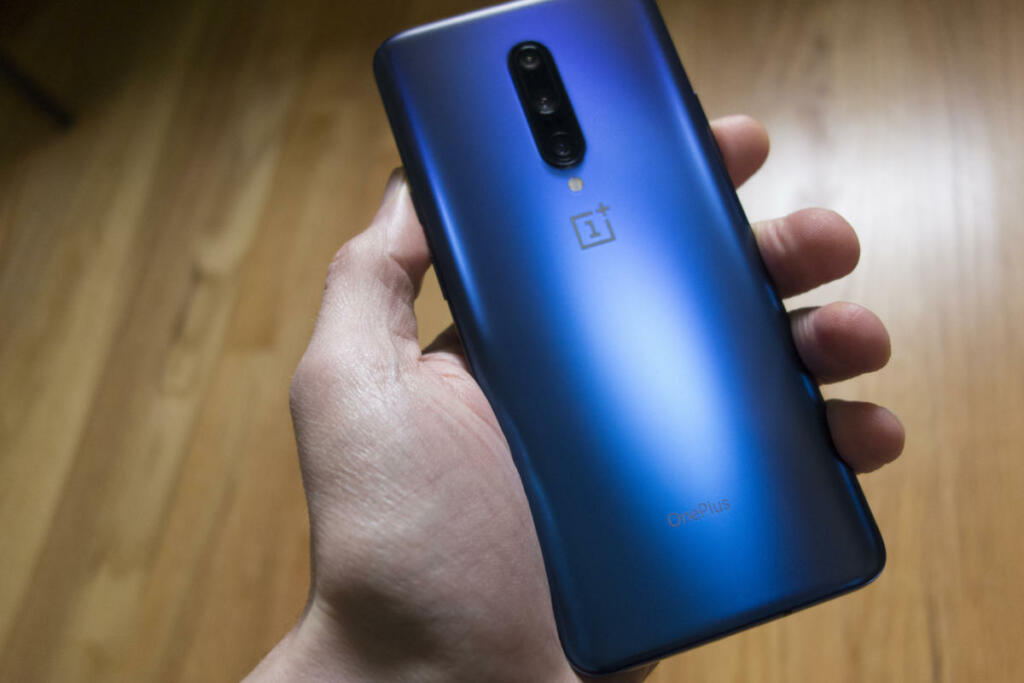 OnePlus went all out with its camera sensors this year.
Before we get into the ability to take good pics, let’s take about camera hardware. Triple cameras are officially a thing after 2019, and no other phone embraced it quite like the OnePlus 7T Pro. There’s a Leica-branded lens, as always, but I’m much more interested in the specs:
That’s about as good as it gets in a smartphone, with a better optical zoom than the Pixel 4 or the Galaxy S10, and an impressive 117-degree ultra-wide FOV. You’re also getting 4K video at 30 or 60 fps and Super Slow Motion (720P video at 960 fps, and1080P video at 240 fps).

How you shoot is as important as what you’re shooting with, and stock camera apps run the gamut from minimal to overloaded with options. Samsung nails the sweet spot, with an excellent interface, super-fast switching between the lenses and modes, and fantastic manual controls. 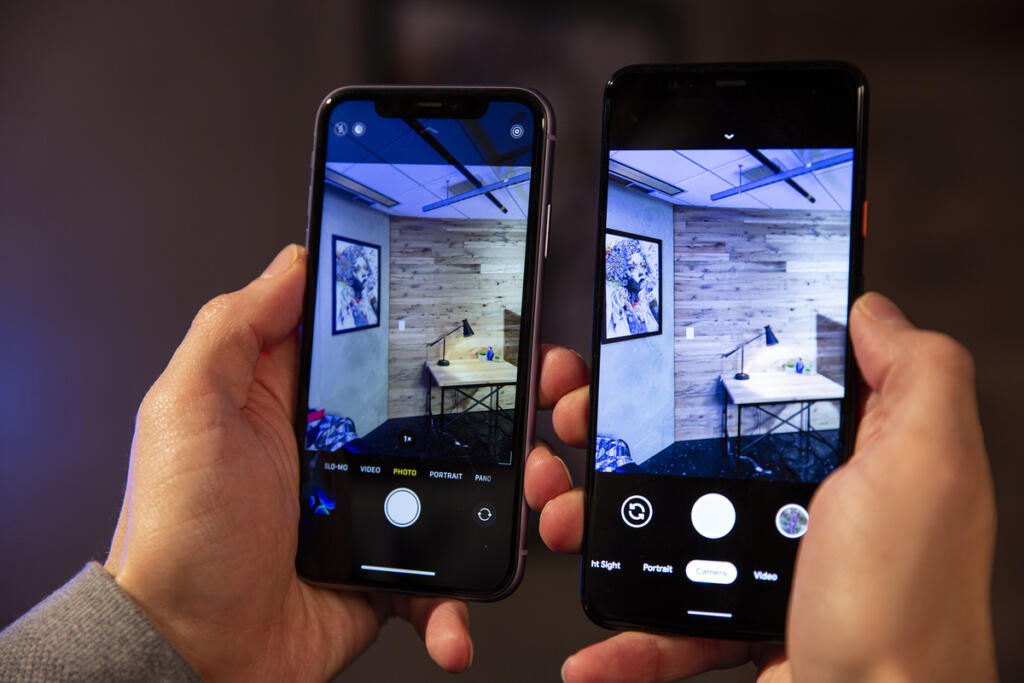 You won’t find an Android phone that takes better pictures than the Pixel 4 (right).
Smartphone camera hardware doesn’t really matter if the processing engine behind it isn’t up to snuff. That’s been the Pixel’s mantra since day one and even with just two cameras, the Pixel 4 continues to dominate thanks to its stellar AI and processing engine. There aren’t enough superlatives to describe how incredible Google’s behind-the-scenes mojo is. From Night Sight to portraits and every possible tricky lighting in between, the Pixel 4 is a veritable masterclass in photo processing, and basically every other phone is playing catchup.

In a vacuum, the Pixel 4 has the best biometric on any Android phone. It’s one of the few to offer secure 3D face unlock and it’s extremely fast and accurate, even working upside down if you happen to pick your phone up the wrong way (which happens more than you’d think). It might not be all that useful beyond unlocking, but I’ll still take it over an in-display fingerprint sensor any day.

As the assault against the headphone jack continues—Samsung removed it from the Galaxy Fold and the Note 10 this year—audio continues to be a bright spot on LG phones. And the G8 has it in spades: Crystal Sound OLED, which uses vibrations and the display to create an all-over sound without a visible speaker, Boombox audio, and a 32-bit Quad DAC headphone jack, not to mention top-notch equalizer presets and noise filters. 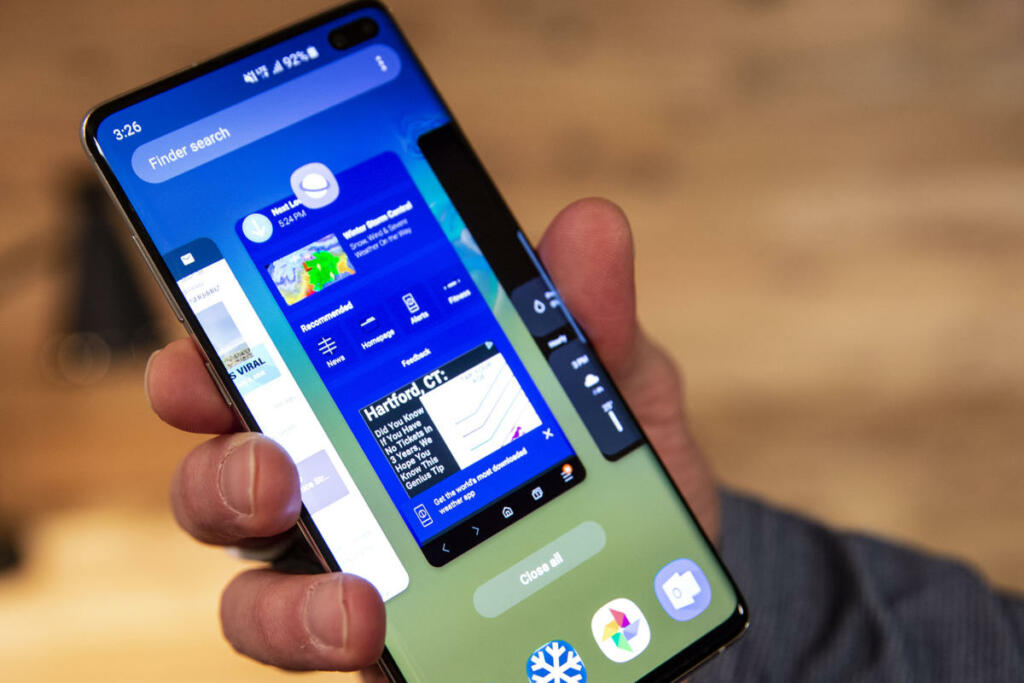 One UI on the S10+ is one of the best Android skins I’ve ever used.
I can’t believe I’m saying this, but the best implementation of Android in 2019 didn’t come from Google, it came from Samsung. With its One UI overhaul update, Samsung radically changed the way it approached its interface, bringing bold changes that departed from stock Android while still respecting Google’s vision. In it, we got a stellar dark mode, excellent gesture navigation, an emphasis on one-handed operation, and an overall beautification of the interface, with bold fonts, clean menus, and smart controls. Android 10 on the Pixel 4 is great, but One UI is smarter, bolder, and more modern.

This is more of an honorable mention pick, but after a year of folding phone hype that’s only going to grow, I felt it needed some attention. You won’t find any folding displays on this list because I’m not yet sold on their value proposition, but the LG G8X convinced me that a dual-screen smartphone could work. The Dual Screen case made exclusively for the G8X is literally that: a second display for your phone. So you can write an email on one side and watch a video on the other. It’s the kind of thing that feels like a gimmick but actually works, and I’d love to be able to pop any phone I wanted into one.
This story, “Building the perfect Android Frankenphone: The best parts of the best phones of the year” was originally published by PCWorld.
Retrieved from: https://www.itnews.com/article/3509593/android-frankenphone-camera-processor-display-specs.html
Summary
Share: