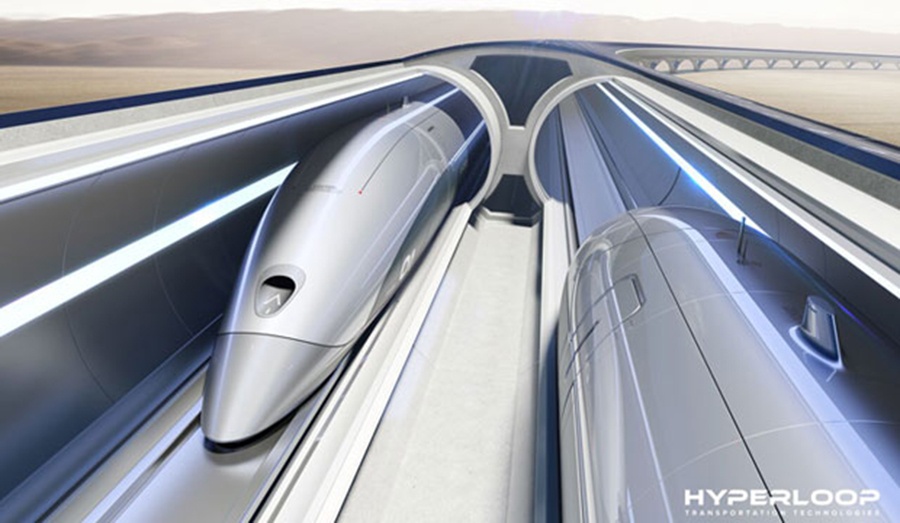 The 300-plus mile trip between Cleveland and Chicago could take as little as 32 minutes by Hyperloop, according to a US$1.2 million feasibility study released earlier this week.

Hyperloop is the only form of high-speed transportation that is profitable and makes economic sense in the United States, maintains the 160-page study, a joint effort of Transportation Economics and Management Systems, the Northeast Ohio Areawide Coordinating Agency, and Hyperloop Transportation Technologies.
“TEMS has performed over 40 feasibility studies for high-speed rail in the United States, and Hyperloop is the first system to be shown as profitable from a financial standpoint, meaning it does not require government subsidies,” said Alex Metcalf, president of Frederick, Maryland-based Transportation Economics and Management Systems, a consulting firm specializing in inter-city transportation.
“The Great Lakes corridor, through Cleveland, will need to meet the growing transportation demands heading into the coming decades,” said Grace Gallucci, executive director of the Northeast Ohio agency.
“Hyperloop is proving to be the best choice to expand our infrastructure from an economic standpoint,” she continued. “Hyperloop meets the region’s capacity needs and does so faster, cheaper, and more sustainably than other options currently available.”

Hyperloop technology, still in the testing stages, uses a passive magnetic system and linear electric motor to propel capsules containing passengers or freight in reduced pressure tubes.
Since most of the air has been removed from the tubes, aerodynamic drag is reduced dramatically. Friction is reduced further by the magnetic levitation system, which lifts the capsule above its guideway.
Low air resistance and friction allow the capsules to gain very high speeds of more than 700 miles per hour on straightaways in the system.
An added bonus of the technology is that much of the energy spent launching capsules can be recovered electrically as the vehicle slows down.

In the feasibility study, researchers describe three possible routes the Cleveland to Chicago Hyperloop line could take.
There’s an optimal straight line route that’s the shortest between the two cities and travels from Youngstown, Ohio, and through Toledo and South Bend, Indiana. That trip would take 32 minutes.
The planners also identified an alternative “toll road” route. Because it’s following the path of the old Ohio and Indiana turnpikes, there are more curves in that route than in the others the researchers devised. That adds time to the trip. From Youngstown to Chicago would be 68 minutes.
A third “hybrid” route is designed to make the greatest use of existing straight rail and highway alignments to reduce the need for easements. The Youngstown to Chicago trip using the hybrid route would be 50 minutes.
“The biggest challenge in doing a new transportation facility of any kind is acquiring the right of way,” said Rick Harnish, executive director of the High Speed Rail Alliance, a high-speed train advocacy group in Chicago.
“You’ve got to have some real gumption to get that right-of-way,” he told TechNewsWorld.
“When we built the interstate highway system, we decided as a nation it was worth destroying some neighborhoods and carrying guys out of their houses with shotguns in their hands because it was good for the public,” Harnish continued. “Just changing the technology doesn’t change that.”

One major challenge Hyperloop proponents will face is proving the technology does what they say it will do.
“Any new technology is going to have kinks,” said Joseph P. Schwieterman, director of the Chaddick Institute for Metropolitan Development at DePaul University in Chicago.
“Having a good demonstration of the technology’s workability is an important priority,” he told TechNewsWorld.
“This project could serve as a test case for investors, since it covers flat terrain and has an enthusiastic partner in Cleveland to see it through to completion,” Schwieterman said.
Getting regulatory approval to enable the system to handle passengers also could face roadblocks.
“That could happen quickly, or it could drag out,” Schwieterman said. “It’s simply impossible to predict.”

In a number of ways, Hyperloop systems are safer than existing transportation systems, the researchers pointed out in their feasibility study.
For example, the system will be highly automated, which will remove the possibility of human error.
The system also will be fully enclosed, which will eliminate highway crossings, weather, and trespassers wandering in front of trains — all major causes of deaths and injuries on rail lines.
However, the researchers acknowledged there are some safety issues that will need to be addressed.
For instance, the system must comply with fire codes that allow for the evacuation of passengers and safe access to the system by firefighters, police and other first responders.
There’s also the unsettling possibility of capsules crashing into each other at hundreds of miles per hour. Hyperloop proponents are going to have to explain and demonstrate how such events can be prevented — or at least mitigated if they occur.

Although the study envisions the Hyperloop stopping at cities along its route and having a terminal in Chicago, Carlo Ratti, director of the Senseable City Lab at the Massachusetts Institute of Technology in Boston, sees the system as, at best, a point-to-point transportation solution.
“It’s going to be much more difficult for Hyperloop to get into the center of cities because you need to build a new exchange, while if you use a high-speed train, you can use existing stations,” he told TechNewsWorld.
“Those exchanges are usually quite huge, and the cost to build one in the center of Chicago could be prohibitive,” Ratti added.
Hyperloop is similar to air travel, he said. You leave the city, go to a Hyperloop exchange, get in a capsule, travel to another Hyperloop terminus, then proceed by another transportation mode — car, bus, subway — to your destination city.
I’s difficult to scale the technology because to scale a network you need switches, Ratti said, and “it’s super difficult to have switches with Hyperloop.”

“The trip between Chicago and Cleveland is painful, whether you’re flying or driving. The train trip is an embarrassment,” observed High Speed Rail Alliance’s Harnish.
“Travel is incredibly important to a modern economy. Modern economies have cites tied together like this in two hours or less, with very frequent service,” he continued. “If we want to maintain competitiveness worldwide, its urgent that we figure this out.”
Retrieved from: https://www.technewsworld.com/story/32-Minute-Cleveland-Chicago-Hyperloop-Run-Is-Feasible-Study-Says-86424.html
Share: