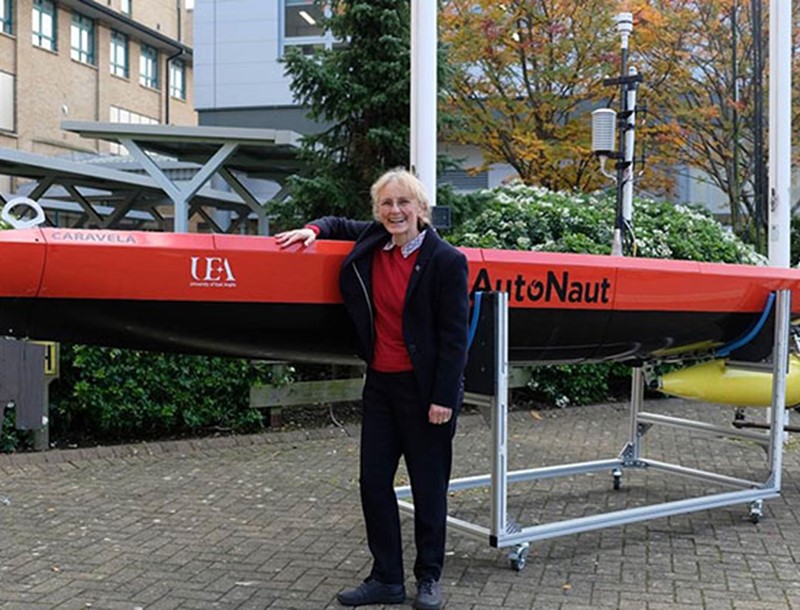 A researcher at the University of East Anglia in the U.K. has helped design a combination of an unmanned surface vessel and an autonomous underwater vehicle to deploy research equipment in remote and inaccessible ocean locations. The AutoNaut has been specially adapted to carry and release underwater Seagliders. The gliders carry a range of sensors to collect data for research on ocean processes to better understand climate.
The Seagliders are the same size as a small human diver, but can reach depths of 1,000 m (3,000 ft.) and travel the ocean by itself for months, covering thousands of kilometers. However, they are difficult to launch inshore and usually have to be deployed from ships, which can make timing their release tricky.
It can also take a long time, and a lot of battery life, to reach remote study sites. Other locations can be dangerous to access because of piracy or political tensions.

Built by U.K. firm AutoNaut Ltd., the 5-meter-long AutoNaut can be deployed from a beach or a ship, and it can wait in position until the Seaglider is ready to be released by remote pilots.
The AutoNaut is propelled by the motion of the waves and carries a range of sensors for meteorology and/or oceanography, including atmospheric pressure, air temperature and humidity, wind speed and sea surface temperature. Its systems and sensors are powered by solar panels. It is also designed to withstand heavy seas, is self-righting, and can be piloted using satellite communication.
The new vessel has been named “Caravela” by Karen Heywood, a professor at the Centre for Ocean and Atmospheric Sciences at the University of East Anglia (UEA). She came up with the idea of having a robot that could deploy the Seaglider. It is named after the Portuguese man-o’-war — a colony of creatures working together, often incorrectly called a jellyfish — that drifts with surface currents.
The design, build and science missions of Caravela are funded by a €3.5 million ($3.89 million) research grant that the European Research Council awarded to Prof. Heywood. 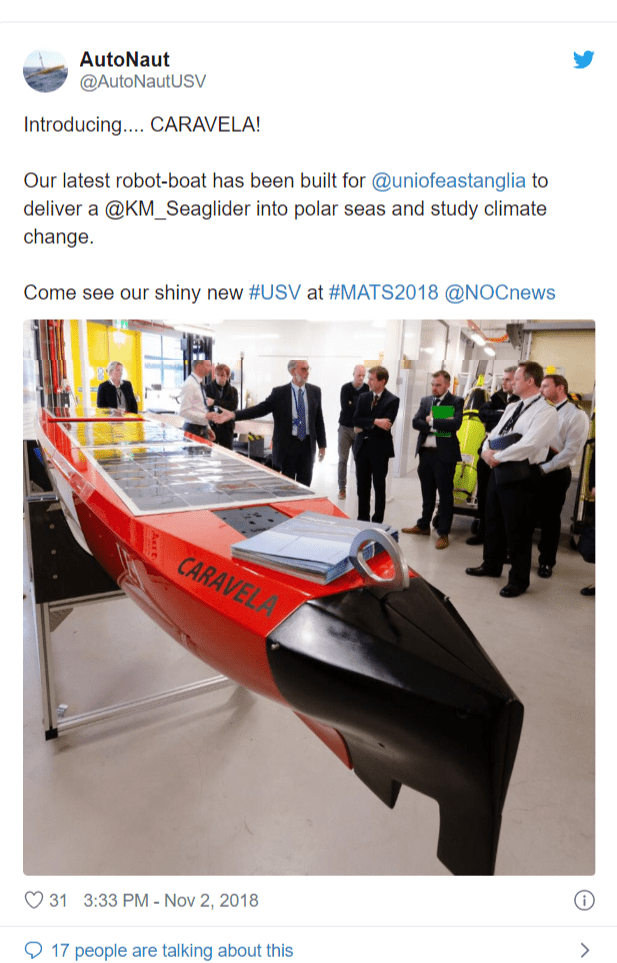 This month, Caravela will be tested in the Atlantic Ocean, off the coast of Barbados, as part of a major international experiment to track the formation of clouds and their role in the climate system. Launched from shore, the unmanned marine vessel will make her way to an ocean area to the east of Barbados, known as Tradewind Alley.
The UEA team will use combined surface vehicle and glider measurements to understand how the ocean temperatures affect the layer of air above, and how the winds and sunshine affect the top tens of meters of the ocean.
“We are really excited to have worked with AutoNaut UK on the development of Caravela,” said Heywood. “We can now send a Seaglider into the middle of an ocean basin without having to use a ship, and where it is too dangerous to send one.”
“This means we can reserve the glider battery for the science, so it will have longer endurance,” she added. “It also gives us the ability to more accurately decide when to release the glider, for example ahead of the spring bloom or an extreme weather event.”
“Having sensors on both the AutoNaut and the Seaglider means we’ll get simultaneous meteorological and oceanographic measurements, giving us a more detailed picture of conditions at the study site and helping to further our understanding of factors affecting our climate,” Heywood explained.
“It has been a fantastic and rewarding challenge working with Karen and her world-class team at UEA,” said Pete Bromley, managing director of AutoNaut. “Deploying an ocean robot on an ocean robot is ground-breaking science. We wish them all the best on this next mission and look forward to future collaborations.”
The long-term goal is to use Caravela in the Antarctic and anywhere else that is remote or difficult to access.
Retrieved from: https://www.therobotreport.com/autonaut-seaglider-combination-safely-survey-oceans/
Share: