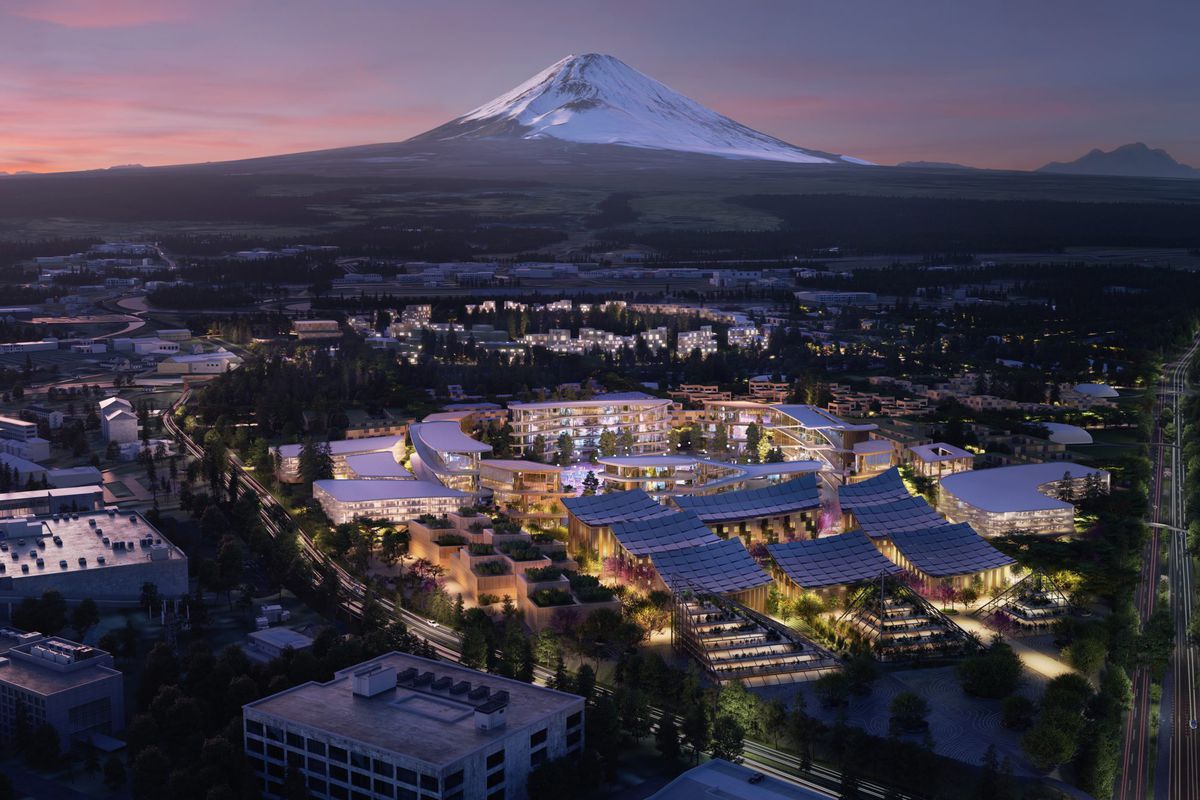 Just like its host city of Las Vegas, there is a lot of noise at CES. Sifting through the lights, sounds and people can be an arduous task even for the most experienced attendees. Hidden past the North Hall of the Las Vegas Convention Center (LVCC) is a walkway to a tech oasis housed in the Westgate Hotel. This new area hosting SmartCity/IoT innovations is reminiscent of the old Eureka Park, complete with folding tables and ballroom carpeting. The fact that such enterprises require their own area separate from the main halls of the LVCC and the startup pavilions of the Sands Hotel is an indication of how urbanization is being redefined by artificial intelligence (AI).
Many executives naively group AI into its own category with SmartCity inventions as a niche use case. It is just the reverse, however, as Akio Toyoda, Chief Executive of Toyota, presented at CES. The “Woven City,” initiative by the car manufacturer illustrates that autonomous cars, IoT devices and intelligent robots are subservient to society and, hence, require their own “living laboratory.”
Toyoda boldly described a novel construction project for a city of the future 60 miles from Tokyo. “With people, buildings and vehicles all connected and communicating with each other through data and sensors, we will be able to test AI technology, in both the virtual and the physical world, maximizing its potential. We want to turn artificial intelligence into intelligence amplified.”
Woven City will include 2,000 residents (mostly existing and former employees) on a 175-mile acre site (a former Toyota factory) at the foothills of Mount Fuji, providing academics, scientists and inventors a real-life test environment.
Toyota hired the Dutch architectural firm Bjarke Ingels Group (BIG) to design its urban biosphere. According to Bjarke Ingels, “Homes in the Woven City will serve as test sites for new technology, such as in-home robotics to assist with daily life. These smart homes will take advantage of full connectivity using sensor-based AI to do things automatically, like restocking your fridge, or taking out your trash – or even taking care of how healthy you are.”
Construction is set to begin in 2021, but the architect is already boasting. “In an age when technology, social media and online retail is replacing and eliminating our natural meeting places, the Woven City will explore ways to stimulate human interaction in the urban space. After all, human connectivity is the kind of connectivity that triggers wellbeing and happiness, productivity and innovation.”

Walking back into the LVCC from the Westgate, I heard Toyoda’s keynote in my head – “mobility for all” – forming a prism in which to view the rest of the show. Thousands of suited executives led me under LG’s television waterfall to the Central Hall. Hidden behind an out-of-place Delta Airlines lounge, I discovered a robotics startup already fulfilling aspects of the Woven City.
Vancouver-based A&K Robotics displayed a proprietary autonomous mobility solution serving the ballooning geriatric population. The U.S. Census Bureau projects that citizens over the ages of 65 will double from “52 million in 2018 to 95 million by 2060” (or close to a quarter of the country’s population). This statistic parallels other global demographic trends for most first world countries. In Japan, the current population of elderly already exceeds 28% of its citizenry, with more than 70,000 over the age of 100.
When A&K first launched, it marketed conversion kits for turning manual industrial machines into autonomous vehicles. Today it is applying its passion for unmanned systems to improve the lives of people with disabilities. As Jessica Yip, A&K COO, explains, “When we founded the company, we set out to develop and prove our technology first in industrial environments moving large cleaning machines that have to be accurate because of their sheer size. Now we’re applying this proven system to working with people who face mobility challenges.” The company plans to initially sell its elegant self-driving wheelchair (shown below) to airports, a $2 billion opportunity serving 63 million passengers worldwide. 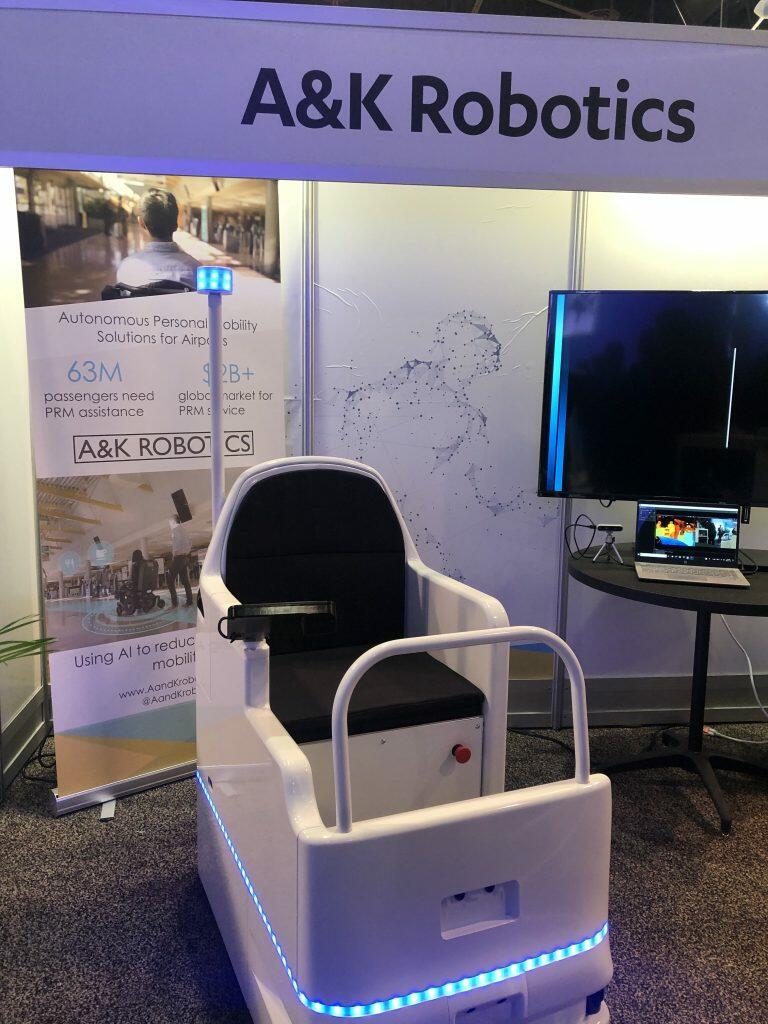 In the United States the federal government mandates that airlines provide “free, prompt wheelchair assistance between curbside and cabin seat” as part of the 1986 Air Carrier Access Act. Since passing the bill, airport wheelchair assistance has mushroomed to an almost unserviceable rate as carriers struggle to fulfill the mandated free service.
“Ninety percent of the wheelchair problems exist because there’s no money in it,” said Eric Lipp of the disability advocacy group Open Doors. “I’m not 100% convinced that airline executives are really willing to pay for this service.” In balancing profits with accessibility, airlines have employed unskilled, underpaid workers to push disabled fliers to their seats. A&K’s solution has the potential of both liberating passengers and improving the airlines’ bottomline performance. Yip contends, “We’re embarking on moving people, starting in airports to help make traveling long distances more enjoyable and empowering.”
A&K joins a growing fleet of technology companies in tackling the airport mobility issue. Starting in 2017, Panasonic partnered with All Nippon Airways (ANA) to pilot self-driving wheelchairs in Tokyo’s Narita International Airport. As Juichi Hirasawa, Senior Vice President of ANA, states: “ANA’s partnership with Panasonic will make Narita Airport more welcoming and accessible, both of which are crucial to maintaining the airport’s status as a hub for international travel in the years to come. The robotic wheelchairs are just the latest element in ANA’s multi-faceted approach to improving hospitality in the air and on the ground.”
Last December, the Abu Dhabi International Airport publicly demonstrated for a week autonomous wheelchairs manufactured by US-based WHILL. Ahmed Al Shamisi, Acting Chief Operations Officer of Abu Dhabi Airports, asserted: “Convenience is one of the most important factors in the traveller experience today. We want to make it even easier for passengers to enjoy our airports with ease. Through these trials, we have shown that restricted mobility passengers and their families can enjoy greater freedom of movement while still ensuring that the technology can be used safely and securely in our facilities.”
At the end of his remarks, Toyoda joked, “So by now, you may be thinking ‘has this guy lost his mind? Is he a Japanese version of Willie Wonka?’” As laughter permeated the theater, he excitedly confessed, “Perhaps, but I truly believe that this is the project that can benefit everyone, not just Toyota.”
I left CES more encouraged about the future as entrepreneurs are focused on something bigger than robots. In the words of Yip: “As a company we’re looking to serve all people, and are strategically focused on airports as a step towards smart cities where everyone has the opportunity to participate fully in society in whatever way they are interested. Regardless of age, physical challenges, or other, we want people to be able to get out of their homes and into their communities. To be able to see each other, interact, go to work or travel whenever they want to.”
Retrieved from: https://www.therobotreport.com/toyota-woven-city-living-laboratory-robots/
Share: