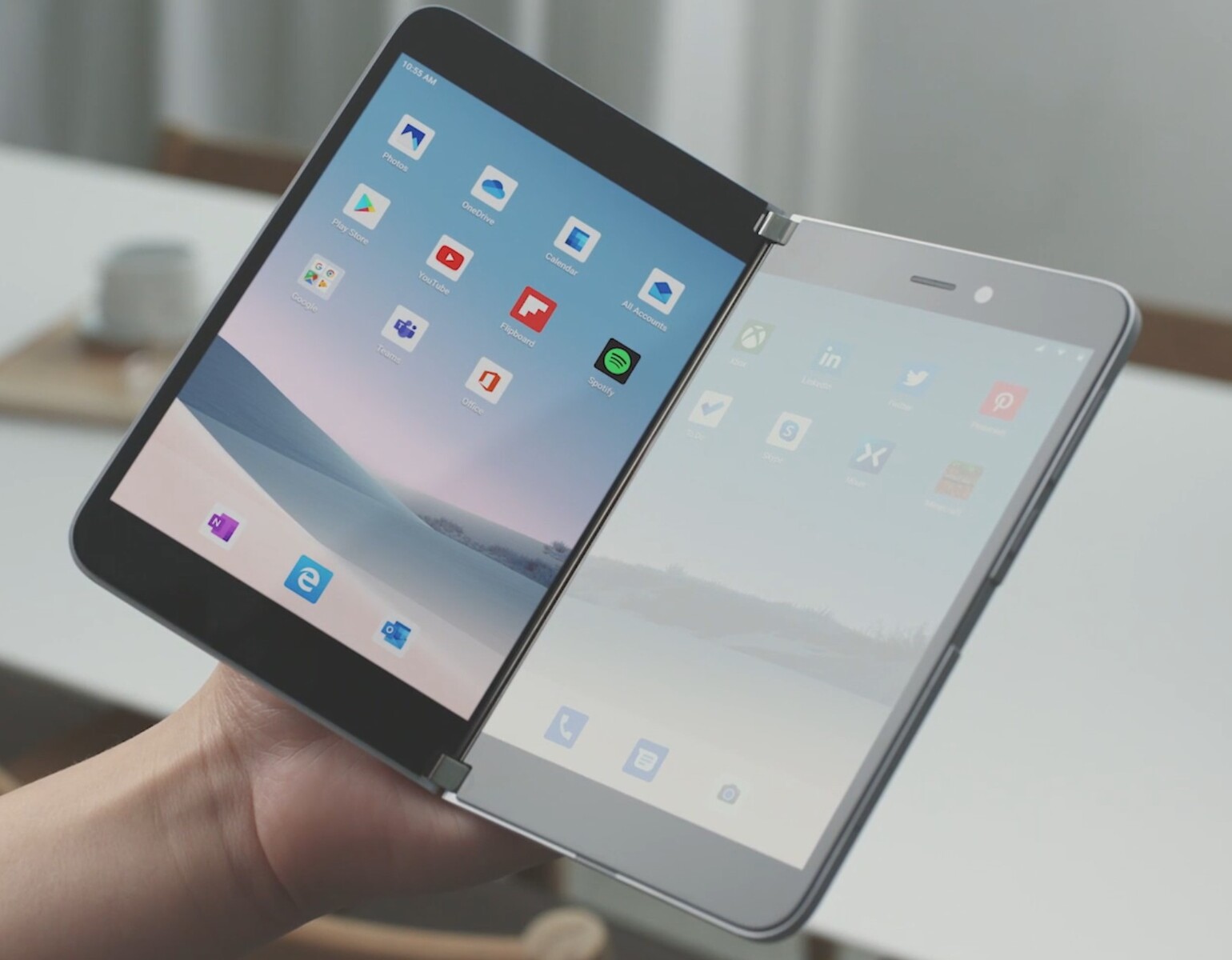 Microsoft’s first Android phone could be hugely significant, but plenty of people are bound to write it off quickly and miss the point. 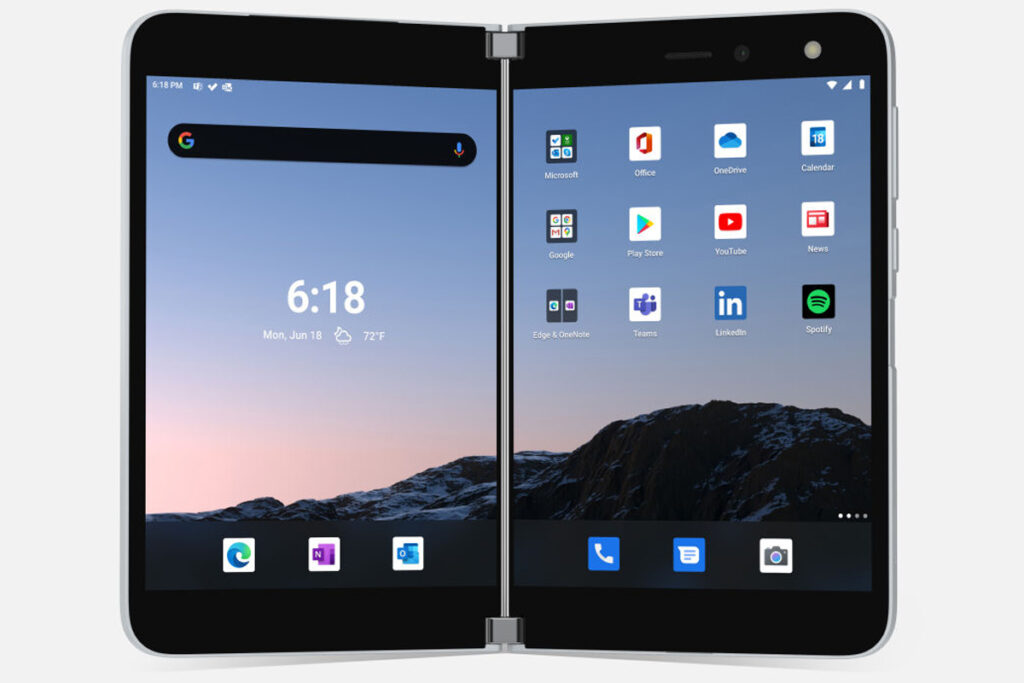 I’m gonna go ahead and call it: The reviews for the Surface Duo, Microsoft’s long-under-development and finally-ready-for-release first Android phone, aren’t gonna be glowing.

The Duo, launching Sept. 10 for a cool $1,400, isn’t exactly an ordinary device. It may or may not be a product worth buying for most people — that’s yet to be seen. What we can say, though, is that the Duo is a first-generation stab at a very different class of gadget. It’s intended for a very specific type of tech user. And approaching it with the standard review technique of comparing components and obsessing over specs is going to miss the bigger picture of what it’s all about.

To wit (brace yourselves, phone nerds): The Duo uses an older-generation processor instead of the latest and greatest high-end chip (gasp!). It lacks near-field communication (gulp!), which means it won’t work with most in-person mobile payment systems. And it has but a single camera on the inside of its portfolio-like folding body (grunt!) — one that, unlike with the typical top-dollar phone of today, doesn’t appear to be a focal point of the product.

Like I said, it’s almost certainly not gonna be right for everyone — and it may or may not be advisable for anyone in its current form. But what matters more than the exact implementation of this one initial product is the broader vision it represents and the mobile-tech future it could portend — if Microsoft remains committed and pushes it forward properly.

This isn’t a standard phone launch, in other words. And if you want to appreciate the Duo’s potential significance, you have to break yourself out of that standard phone mindset.

We’ve talked a lot so far about what the Duo doesn’t have and the reasons why it might fail to hit the mark in this first incarnation. Let’s back up now and talk about what the device does possess and the intriguing new possibilities that come with that.

At its core, the Duo is a dual-screened phone, with two 5.6″ panels connected by a 360-degree-pivoting hinge. The screens aren’t flexible or foldable or rollable or anything like that; they’re regular displays, which means the durability and longevity downsides that plague the more sensational but less practical foldable phones of the moment aren’t at all present.

That foldable phone comparison is actually pretty important — because that’s also a significant point of distinction for the Duo, especially compared to what most other Android device-makers are currently doing. As I said at the start of this year, while lots of companies are coming out with foldables, Microsoft is coming out with a smarter twist on the concept — and, most critically, coming up with a genuine reason for it to exist.

To quote my all-time favorite writer:

When we talk about foldable phones right now, two common themes come up: First, by and large, they’re innovation for the sake of innovation — a solution in search of a problem that doesn’t quite exist. Cool as they may seem, they just don’t add much of meaningful value into the day-to-day phone-using experience. And even in the rare situations where they may have some practical benefit in terms of portability, they’re laden with compromises that make them inadvisable for practically everyone.

So, yeah: On the, ahem, surface, the Duo may not seem as eye-catching or as awe-inspiring as a phone with a screen that actually folds — but it has something foldable phones don’t, and that’s an actual purpose. Instead of coming up with a novel new hardware trick and then trying to find some practical role for it, Microsoft seemed to start with the purpose and then figure out what form best suited it.

That’s apparent in the Duo’s software development kit, which cleverly allows app-makers to go beyond the most obvious multitasking possibilities and to offer up some productivity-oriented advantages that wouldn’t be present in just any ol’ dual-screen setup (hi, LG!).

Open Outlook on the Duo, for instance, and you’ll see your message list on one screen and a message’s contents on the other — or your calendar on one side and appointment details on the other. It’s a more desktop-like model, by design, and the same concept could apply to any app that taps into the pattern. 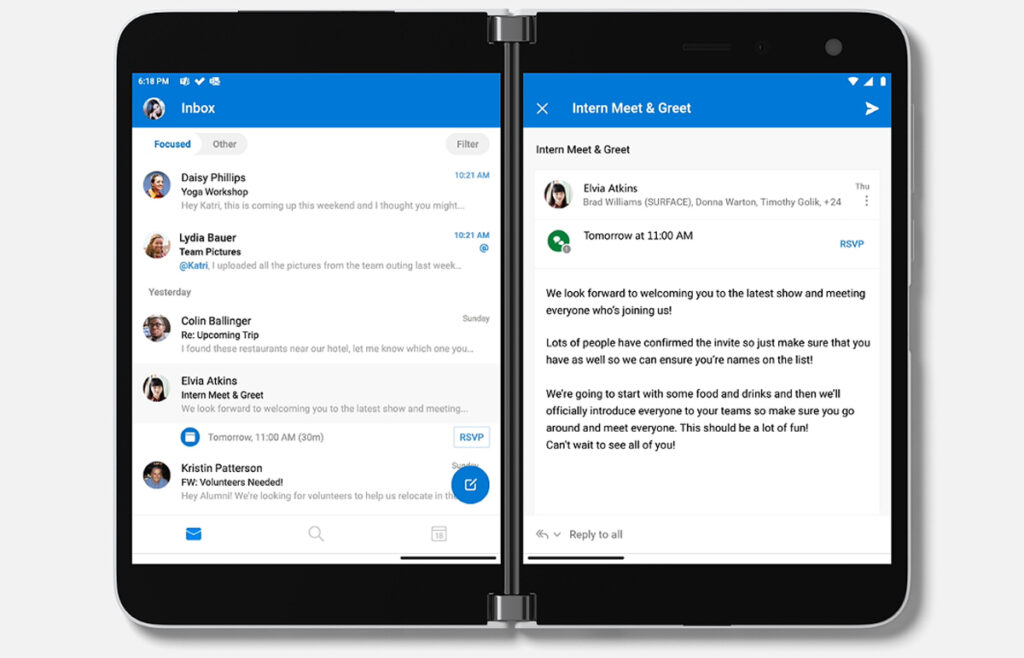 Word, meanwhile, relies upon the Duo’s “two page” setup — in which you get an open-book-like experience, complete with page turning. Amazon’s Kindle app is also apparently set to support that.

Other apps might tap into the “dual view” arrangement, in which you view similar sorts of content side by side — two documents, two lists, two images, or even two products on shopping sites — so you can easily compare and work across the items without having to do any cramped screen splits or awkward back-and-forth switching.

And others could use the “companion pane” view, in which tools, menus, and control panels that’d typically be hidden behind a button can remain visible and accessible on the second screen. 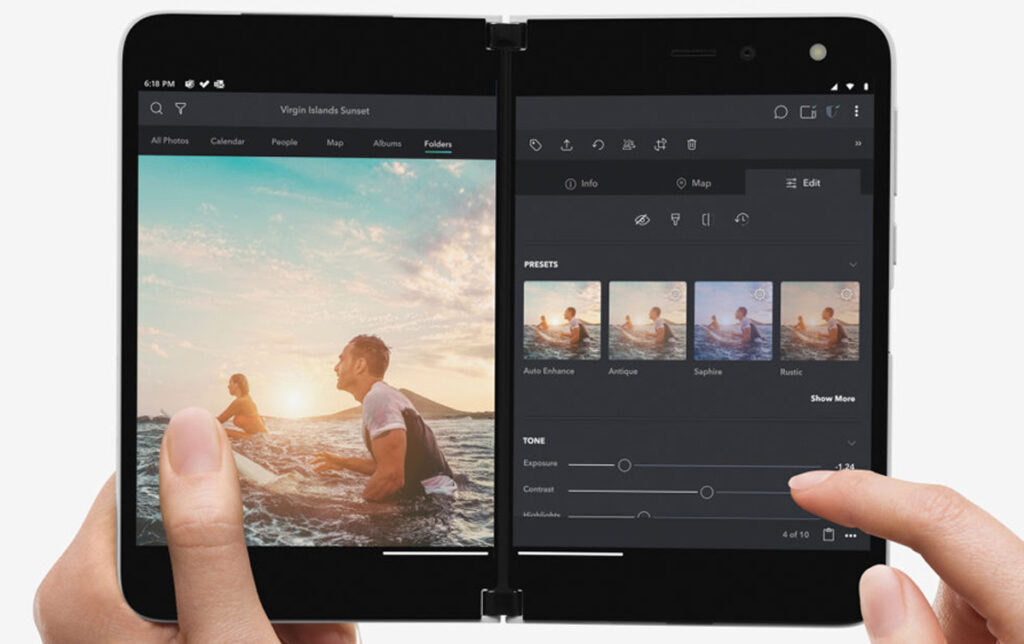 Even with the simple setup of two different apps existing side by side, Microsoft has put some thoughtful real-world systems into place. For instance, the company says it relies on predictive algorithms to do things like intelligently open a link you tap from within an app on the other screen instead of having it take over your active view. With certain apps, you can also drag and drop elements from a program on one screen to a program on the other instead of cutting and pasting or relying on other cumbersome methods.

And Microsoft has been adamant about the fact that even when an app doesn’t support these elevated usage scenarios, it’ll run on a single screen without any quirks or compatibility issues. So even with the Duo’s most limited implementation, you’ll still get a fully functional two-screen environment.

All in all, it’s a system made for getting stuff done — not just for seeming cool, à la foldables, or for acting like a phone in the traditional sense. And that means its appeal is invariably going to be quite different from the typical consumer-aimed product.

In a sprawling interview with Fast Company, Microsoft Chief Product Officer Panos Panay relays some interesting points about what the Surface Duo represents and for whom it might be properly suited. The interview is overflowing with info and well worth reading in its entirety, but I’ll quickly sum up a few key points relevant to our current discussion: 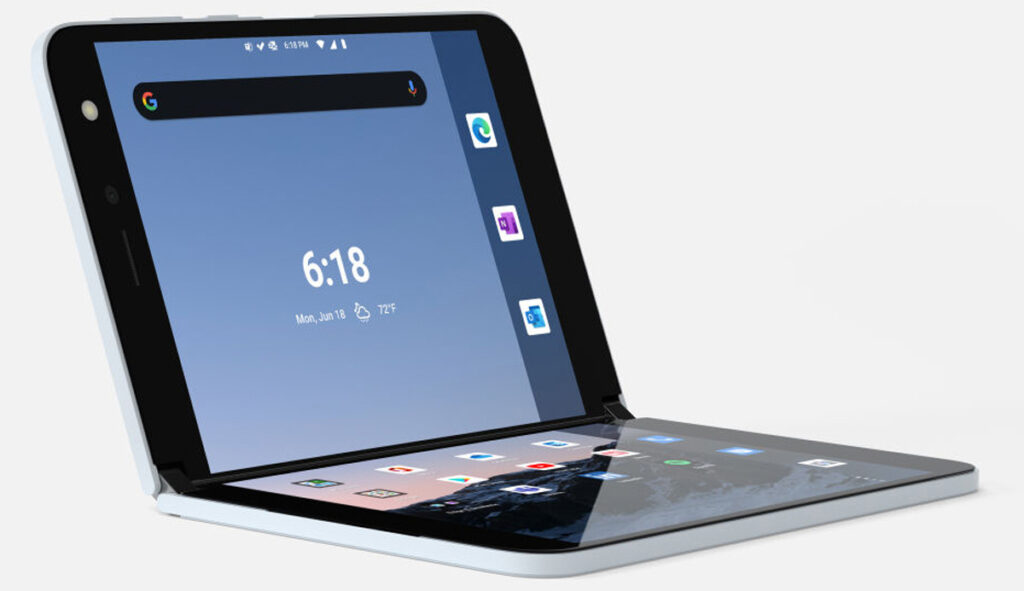 All considered, the Duo seems designed primarily for two things: actual productivity-oriented work — and work that specifically revolves around the Microsoft ecosystem of apps and services. It could be a full-on phone replacement, or it could be a device you use in tandem with a more typical phone alongside it. But it almost certainly isn’t something that’s meant to compete directly with, say, a Samsung Galaxy Fold phone. Or even a Galaxy S flagship. Heck, you could argue that it’s less of a phone and more of a versatile tablet that just happens to make calls.

Now, if Microsoft were to address the device’s most glaring current caveats — namely the apparent lack of an exceptional camera, according to early reports, and the phone’s inability to handle contact-free mobile payments — the Duo could more easily stand on its own without having to be thought of as a possible smartphone supplement.

But to focus entirely on those drawbacks right now is a mistake. The Surface Duo seems best viewed as a first step — an ambitious move toward creating a new kind of product category and a bold attempt at fleshing out the ever-expanding and increasingly platform-agnostic Microsoft ecosystem. It doesn’t seem like a stretch to compare this beginning to the start of the primary Surface line, where the earliest model was reviewed as being intriguingly different and incredibly promising but not fleshed out enough to be worth buying.

Back in February, I posed the question of whether Google could carry the BlackBerry torch — whether it could take on the role of the de facto business-phone standard, the company that positions itself as providing a complete mobile-tech experience with top-notch native services and an emphasis on both productivity and security. At the time, I said it was Google’s race to lose but that Microsoft sure seemed to be setting its sights on the same title.

Well, six months later, and here we are. Anything’s still possible, and the Surface Duo could by all means end up being a Kin-style punchline. There’s ample room for error. But as Google hems and haws and endlessly reassesses its own mobile-tech strategy, the ball certainly seems to have shifted over to Microsoft’s side of the court.

And focusing too closely on the first play instead of studying the underlying strategy could leave you with a myopic view of what’s to come.