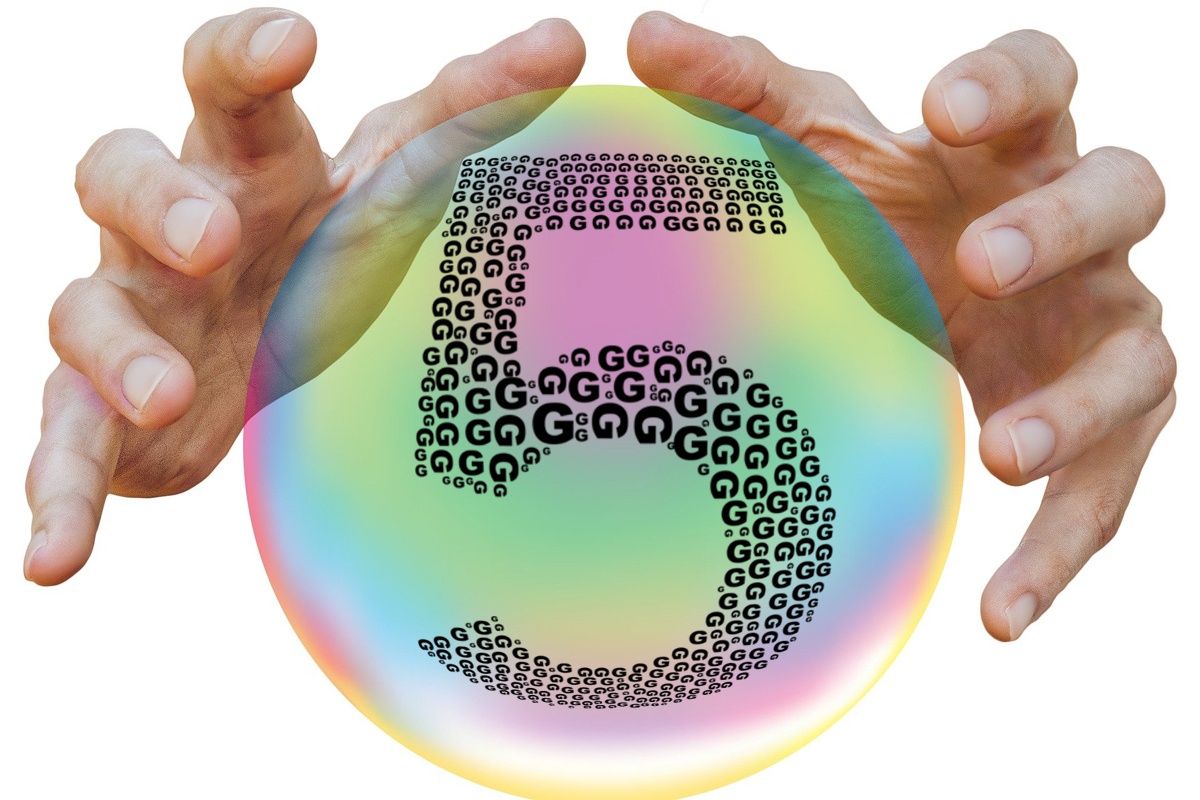 Should you spring for a 5G phone today based on the possibility of what it might do for you tomorrow? Yeah — about that…

Here’s an amusing little disconnect to wrap your musty ol’ mammal-brain around: Right now, when you’re looking at new phones, 5G is everywhere. You can hardly avoid it!

And yet, if you find yourself holding one of those fancy new 5G-capable contraptions, you’ll quickly be confronted with a competing reality: Out in the real world, when it comes to actual usage and availability, 5G is practically nowhere.

As we’ve been thinking through Google’s 2020 Pixel lineup (and as our Apple-adoring amigos begin pondering a similar “To 5G or not to 5G?” decision on the iDevice front), I’ve heard lots of questions about the value of buying a smartphone with 5G today and whether it might be a smart long-term strategy — even if the value of 5G at this particular moment is questionable (at best).

The unsensational, hype-free truth is that no one really knows for sure what the next few years will hold and how 5G will (or won’t) develop — and anyone who says they do is blowin’ a whole lot of hooey into your curiously hot head holes. What we can say, though, is that assuming right now that 5G is gonna be a meaningful advantage within the likely lifespan of your next mobile device is making an awfully big leap — one that our currently available data simply doesn’t support. And assuming that the specific type of 5G in your next phone is gonna be the one that matters the most two, three, or five years from now is every bit as uncertain.

Let’s look at it from a logical perspective, shall we? No matter what kind of phone you’re thinking about getting next, there are a few key points worth keeping in mind to balance out all the heavy-duty 5G-friendly marketing that’s gonna be shoved in your face over these next few years.

The truly fast kind of 5G is barely even available in the U.S. — and seems highly unlikely to become widespread anytime soon

You can’t talk about 5G without giving yourself a serious headache. That’s because “5G” in and of itself doesn’t really mean anything; it’s a marketing term, and its very existence serves mostly as a vehicle for convincing us to buy new phones we probably don’t need at inflated prices beyond what we probably oughta pay — and then also to switch over to more expensive plans with minimal meaningful value in return.

To wit: Here in the U.S., Verizon is focusing on a truly fast type of 5G — one that, when measured at the exact right place where it’s available, blows existing network speeds right out of the water. By its very nature, though, that type of 5G is super-limited in reach and likely to remain that way for the foreseeable future. Why? Simple: It’s a short-range technology, and it doesn’t travel well through walls, trees, alpacas, or other earthly obstacles that dare get in its way.

The other U.S. carriers are mostly focusing on a different type of “5G” technology that’s significantly less speedy but much more practical in its reach.

Numerous analyses keep reaching the same conclusion: The type of 5G you’re most likely to encounter in actual day-to-day life right now is likely to be minimally faster than the 4G you’re used to, at best — and quite possibly a good bit slower, at times.

As the Washington Post put it: “Across most of America in 2020, a 5G phone does diddly squat.” (Major bonus points for the use of “diddly squat” there.)

Or as the good folks at PCMag said in their thorough testing of mobile networks across the country:

We admit it, we bought into the 5G hype. Carriers, phone makers, and chip makers alike have all been selling 5G as faster and more powerful than 4G, with lower latency. So I was shocked to see that our AT&T 5G results, especially, were slower than 4G results on the same network.

In addition to the speed itself is the reliability factor. When a 5G phone isn’t getting a good 5G signal, y’see — something that’s bound to happen a fair bit right now — it drops itself down to 4G. And that, apparently, leads to download speeds that can be as low as half of what a standard 4G connection would give you, according to the Post’s findings.

Or, as my comrade David Ruddock over at Android Police put it, rather poetically: “5G has succeeded — in making my phone more of a pain in the [patootie]” (forgive the euphemism substitution; I can’t be quite as colorful as he was in these particular quarters).

Ruddock notes that across numerous 5G phones, he’s had one consistent thread — which is massive aggravation:

My experience has been one that, at times, is markedly worse than even our existing 4G networks. On T-Mobile, files actually download slower on my phones over 5G than they do over 4G. Latency can be totally ridiculous, too, with pings over 200ms at times — 400% worse than what I typically experience on 4G, and that’s being conservative. On AT&T, 5G data is typically no faster than 4G, assuming it works at all. My Note20 Ultra frequently just loses data connectivity when on AT&T’s 5G for no apparent reason, while all things in the status bar report A-OK … [and] even when 5G does work on AT&T, I’ll frequently experience strange delays in the connection actually responding, resulting in apps like Twitter spinning for five seconds or more as they attempt to refresh their data.

Yipes. And even that isn’t the entire story here.

Allow me to fire up my patented Important-Looking Text Machine again:

Practically speaking, higher data speeds on phones wouldn’t be that transformative for most of us, anyway

Let’s put ourselves in some sunny utopia where all those problems we just went over aren’t present and the super-speedy, compromise-free 5G of The Future™ is everywhere you want it to be.

Even in that almost hilariously unrealistic scenario, you’ve still gotta wonder: How much better is 5G really, from a purely practical perspective? Not in the speed tests and the benchmarks but in your real-world, day-to-day experience, based on the sort of stuff you typically do on your phone.

The Wall Street Journal’s Joanna Stern thought through that while she deliberately stood right next to a Verizon 5G tower in order to actually experience those top-of-the-line data transfer speeds on one of Apple’s new iPhones. And — well:

I downloaded the first two seasons of “Breaking Bad” (about 4GB) in less than 3.5 minutes on Netflix and Apple TV, respectively, and a 2GB game in 45 seconds from the App Store. Speedier than my home broadband network, that’s for sure. Yet it took 4 minutes to pull down just one episode on Amazon Prime Video. … Plus, the iPhone 12 got uncomfortably warm during those downloads. To the point where I had to put it down.And then there’s the battery drain. Downloading those episodes on Verizon’s UWB network used 15% of my battery.

For all the complaints you might have about your current carrier experience, is the time it takes you to download large files on your phone chief among ’em? How many of us are even doing that while connected to mobile data on a regular basis? Most folks I know are mostly looking at email, scrolling through news stories or social media, and maybe streaming the occasional video on the go. The difference between our current 4G speed and that theoretical 5G max speed may be substantial on paper, but in reality, it’s gonna be far less significant most of the time.

In my recent Pixel phone analysis, I said I wasn’t even gonna treat the presence or absence of 5G as a relevant factor to consider — because right now, with very little and extremely limited exception, it just isn’t. And that’s why I had no hesitation with recommending the non-5G Pixel 4a for most people at this point.

So is that a short-sighted recommendation? Is going with a 5G phone now an investment in the future, despite the fact that its 5G element is of questionable value today?

As I said before, I’m not a prophet (much as I do like to dress like one on the weekends), but I genuinely don’t think that’s the case. I think my recommendation is, dare I say it, realistic. Even if we write off all concerns about 5G’s practical, day-to-day-life benefit, the truly fast type of 5G requires you to be standing within eyesight of a tower in order for it to be of any relevance. And there’s absolutely no indication those towers are suddenly gonna pop up on every lamppost across America over the next few years.

But wait! Maybe the slower, closer-to-4G-level type of 5G will become more widespread soon. That seems like a reasonable possibility to consider, right? Well, sure, Senor Hypothetical — but even if it does, so what? If the difference between that and 4G is by and large negligible or at times even a downgrade, who really cares?

On top of that, remember: The Pixel 4a costs $349. It’ll get operating system and security updates for the next three years, after which it won’t be fully advisable to keep using. And by that point, you could buy another $350 phone — one that’ll probably have 5G baked in by then, whether you care about it or not — and still have spent less than most 5G phones cost today.

The bottom line is this: Right now, 5G is more about marketing than anything. Maybe that’ll change eventually — or maybe it’ll ultimately just become an unavoidable new standard, regardless of the circumstances surrounding it. But framing a 5G phone purchase today as an investment in the future requires an awfully warped view of the realistic factors surrounding the technology right now — and an awfully optimistic view of its likely path forward.

So buckle up, my compadre: This is by all counts a marathon, not a sprint. And despite what the mobile industry desperately wants us to believe, we’ve barely just left the starting line.