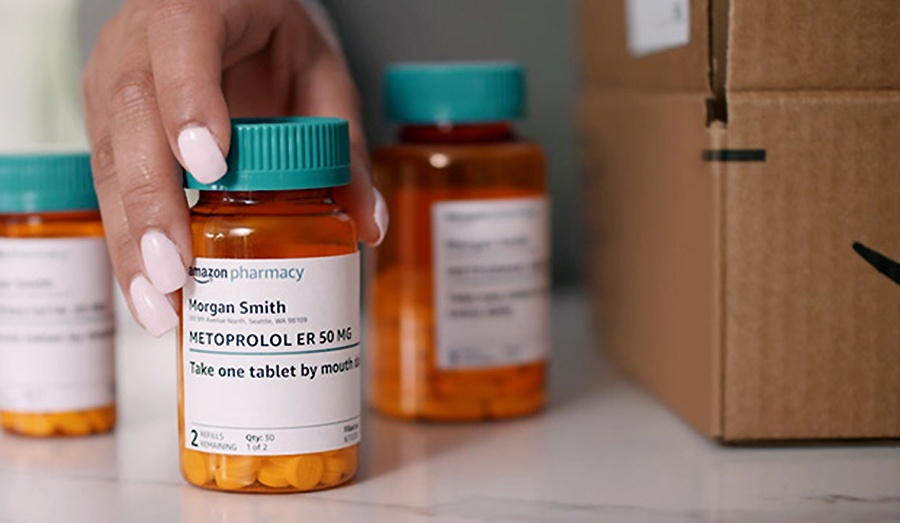 Amazon on Tuesday announced that it’s getting into the online pharmacy prescription business in a big way.

The e-commerce giant revealed it’s setting up a new drugstore on its platform, Amazon Pharmacy, that will allow customers to complete a pharmacy transaction on their desktop or through the company’s mobile app.

Customers will be able to create a secure pharmacy profile to add their insurance information, manage prescriptions, and choose payment options before checking out, Amazon explained in a statement.

In addition, it announced a program for Amazon Prime members that lets them buy medications at a discount when paying for them without insurance. The program, available at the Amazon Pharmacy and 50,000 pharmacies across the country, can save Prime members 80 percent off generic drugs and 40 percent off brand name medications.

In its announcement, Amazon noted filling prescriptions at its pharmacy would be as easy as shopping anywhere else on the platform.

By browsing Amazon Pharmacy, customers will be able to discover what’s available in branded and generic medications, as well as different forms and dosages. What’s more, before checking out, consumers can do price comparisons — the cost with a co-pay, without insurance and with the Prime savings benefit.

Friction can be removed from transactions by adding insurance information to an account and requesting a prescription prescriber to send new or existing prescriptions directly to the Amazon Pharmacy for fulfillment.

A number of self-service options are also available at Amazon’s pharmacy, as well as around-the-clock phone access to pharmacists to answer questions about medications.

“We designed Amazon Pharmacy to put customers first — bringing Amazon’s customer obsession to an industry that can be inconvenient and confusing,” Amazon Pharmacy Vice President TJ Parker said in a statement.

“We work hard behind the scenes to handle complications seamlessly so anyone who needs a prescription can understand their options, place their order for the lowest available price, and have their medication delivered quickly,” he added.

Forrester analyst Arielle Trzcinski, in her research notes on the Amazon announcement, sees a number of benefits for consumers in the new pharmacy offering.

“The ability to track your order is a nice added feature than many PBMs (pharmacy benefit manager) and pharmacy experiences do not provide,” she wrote. “Visibility across the supply chain will provide greater comfort to consumers who may be fearful of delays or the risk of medications getting lost in the mail.”

Trzcinski added that consumers are often unaware of the fact that a prescription may be less expensive if it is not processed outside of their insurance. “Typically,” she noted, “that is handled by a conversation between the patient and the pharmacist. Amazon Pharmacy differentiates by pushing that information directly to the consumer bring greater transparency to the process.”

Absent from Amazon’s announcement was any mention of its digital assistant, Alexa. Integration of Alexa and Amazon Pharmacy could yield powerful benefits for medication takers.

“Companies like Cigna and Express Scripts have already tapped Alexa to support members in home with the ability to say, ‘Alexa, order refills of my prescription,'” Trzcinski wrote. “If this data is integrated with Alexa, this could make easy reminders to both take medications and order refills a reality.”

“In the age of virtual healthcare,” she added, “at home pharmacy delivery taps into the growing trend of meeting patients where they are — at home.”

“It is another very large market where distribution skills and a huge customer base positions them for success,” he told the E-Commerce Times.

Josh Crandall, CEO and co-founder of NetPop Research, a market research and strategy consulting firm in San Francisco, explained that Amazon has invested and built an enormous fulfillment and distribution empire. Now, Amazon is scaling further by adding any new physical product categories to its systems.

“Pharmaceuticals are often monthly subscriptions or one-off purchases,” he told the E-Commerce Times. “They are small and easily mailed. It’s a perfect match for their distribution infrastructure.”

At $300 billion, the online prescription market was just too big to be ignored. “The online pharmacy business is very lucrative, and given Amazon’s size, they have a negotiating position with regard to prices that is unmatched next to Walmart,” said Rob Enderle, president and principal analyst at the Enderle Group, an advisory services firm in Bend, Ore.

He added that Amazon may also have an eye on the market’s future growth. Currently, he explained, the pharmaceutical industry has been successful in keeping cheaper drugs from foreign countries entering the United States.

“It’s possible those barriers will be mitigated under a Biden presidency,” he told the E-Commerce Times. “If that’s the case, there will be a significant upside for all online pharmaceutical companies.”

Shaking Up the Market

“When Amazon enters a market like pharmacy, they plan to succeed and their market share will come at other’s expense,” Lowitz said.

“There may be pricing pressure on the current players, and there may be demand for enhanced customer service and communication, like Amazon is sure to provide,” he added.

Crandall maintained that Amazon will be a fierce competitor for other mail-order pharmacies because fulfilling prescriptions via Prime will be convenient and simple. “Physical pharmacies will also be prone to this new competition as well,” he said.

Trzcinski asserted that competitors may have to tweak their offerings to compete with Amazon.

“Walmart and Amazon continue to vie for the attention of healthcare consumers,” she wrote. “With Walmart doubling down on a physical presence for healthcare, we could soon see an addition to the Walmart Plus program for pharmacy delivery in an attempt to compete with Amazon’s new Prime coverage.”

“With Amazon Care already deployed to Amazon employees, future deployment of virtual care access to a broader population is coming closer into view,” she noted. “This initial addition for Prime members focused on pharmacy is likely an indicator of broader healthcare services being added to Prime in the future.”