By admin
< Back to posts
July 19, 2021 34 Comments on The Best Keyboards for Gaming, Comfort, and Not Disturbing Your Coworkers 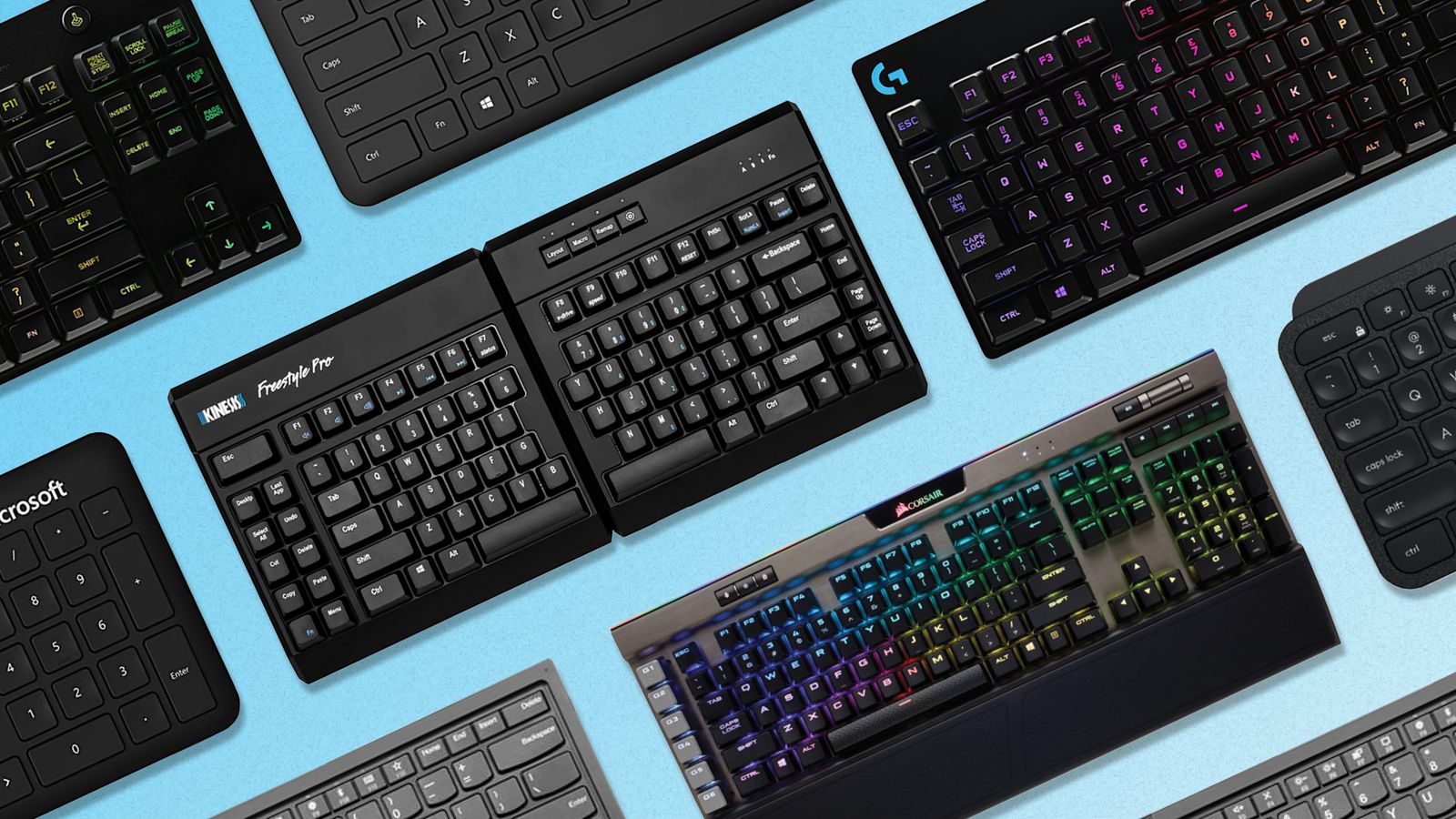 A good keyboard isn’t to be underestimated. Particularly if you’re a laptop user, a full-size one can provide a welcome respite from the cramped, often unsatisfying-to-type-on keyboards that are unfortunately found on many models. (Remember all the hate aimed at the butterfly mechanism Apple installed in its 2015 MacBooks?) Whether you’re sitting at your desk all day tapping away or gaming in your free time, you want a keyboard to feel good and work well.

As with most computer accessories, however, there are so many different options available that choosing one can be a daunting task, especially if you’re shopping online and not able to try them out in person beforehand.

If you’re doing a lot of typing on a daily basis, one of the first things to consider is whether you want a mechanical keyboard. They had fallen out of favor with almost everyone but purists for a long time, but have seen a resurgence in recent years and are now widely available again in a range of different options.

The big advantage with these keyboards, which use individual mechanical key switches as opposed to the rubber membranes or rubber domes found on others, is their responsiveness and tactility—often with a satisfying click sound. You can clearly feel each key press, with none of the mushiness you might be accustomed to with other keyboards. While there are inexpensive options (some even under $50), mechanical keyboards do tend to be more expensive and can easily run well over $100.

The downside for some, however, is the same thing that many like about them: the noise and tactility. While there are plenty of quieter options, a membrane-based keyboard will still be quieter, which might be better if you’re sharing an office with other folks. And some people do prefer the softer feel and shorter key travel of a membrane or rubber dome keyboard.

Just like any other peripheral, wireless keyboards can offer more convenience than wired ones that are tethered to your computer all the time. But they can also introduce some unwanted issues that lead many folks to prefer the traditional wired option. Chief among those is that wireless keyboards can have a slight lag or delay between when you press a key and when your computer actually registers it. That can be a big problem for serious gamers, but anywhere from a mild annoyance to virtually unnoticeable for everyone else. Generally, a higher-end wireless keyboard will have less input lag than a cheaper one, and any lag that’s present on a good one will be imperceptible during most tasks. If you want to eliminate the issue altogether, however, there’s still no substitute for a wired keyboard.

Wireless keyboards also don’t all use the same type of technology. Some have Bluetooth, but many use a more traditional radio-frequency (or RF) connection—keyboards that support both types of wireless connections are also starting to become more common. In general, an RF-based keyboard will offer less lag and a more stable connection than a Bluetooth one (although they can be prone to some interference as well if you have more than one device operating on the same frequency). Laptops and desktops don’t have RF connectivity built-in, however, so all RF keyboards come with a small wireless adapter that takes up a USB port on your computer—and can potentially get lost. A Bluetooth keyboard, on the other hand, will just work with any laptop (or desktop with built-in Bluetooth) right out of the box and free up that USB port.

A wireless keyboard also needs to get power from somewhere, which means that you’ll occasionally have to swap out some regular AA or AAA batteries, or recharge the keyboard’s built-in battery.

Beyond that, you can narrow your search further by focusing on your needs. If gaming is a priority, you’ll likely want to look into specialized keyboards that offer other features like additional customizable keys, dedicated controls for volume and other functions, and multi-colored backlighting that can be tailored to your liking (and which can come at an added cost).

If you find that typing on a standard keyboard puts a strain on your arms or wrists, an ergonomic keyboard that offers a more comfortable or flexible typing position can be a great investment with long-term benefits. They accomplish this by splitting the board into two sections that let your arms rest more naturally. No keyboard is going to be a cure-all, however.

How We Selected These Keyboards

To determine which keyboards would make our list, we relied on Popular Mechanics’s previous research and reporting on the subject and took an extensive look at what trusted publications like PC World, Wirecutter, Laptop Mag, and others had to say after their testing of the latest models. We also combed through hundreds of customer reviews on retailers like Amazon and Best Buy, as well as the manufacturers’ websites, to calculate our Consumer Score, which is the percentage of reviewers who rated a given keyboard at least four out of five stars. 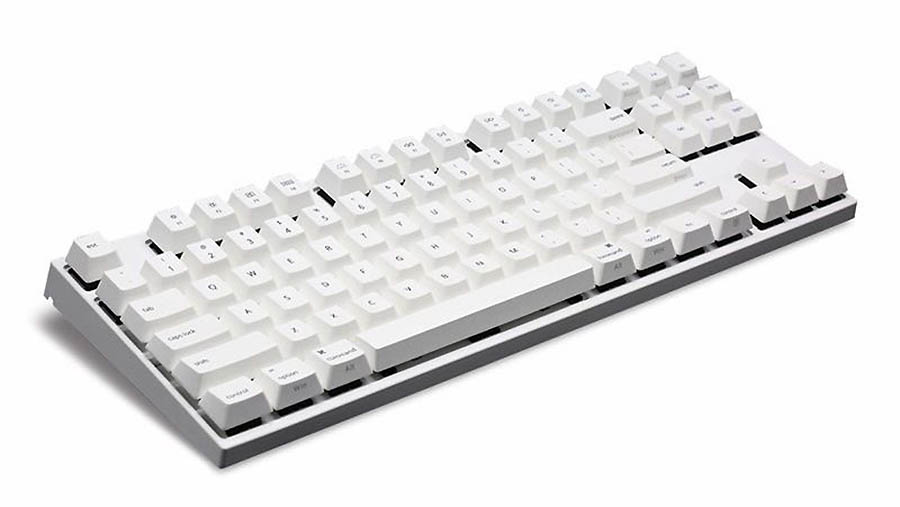 If you’re looking to step up from off-the-shelf, non-customizable mechanical keyboards, the Varmilo VA87M comes highly recommended by Wirecutter. And there are a range of different key switch options—from quieter, easier to press Cherry MX Red switches to louder, firmer Cherry MX Blue switches—to suit your preferred degree of clickiness, shall we say, and tactility. You can also order them customized to your taste instead of doing the customizing yourself, with various colors and platform-specific key caps available to choose from (some of which can expectedly bump up the price). 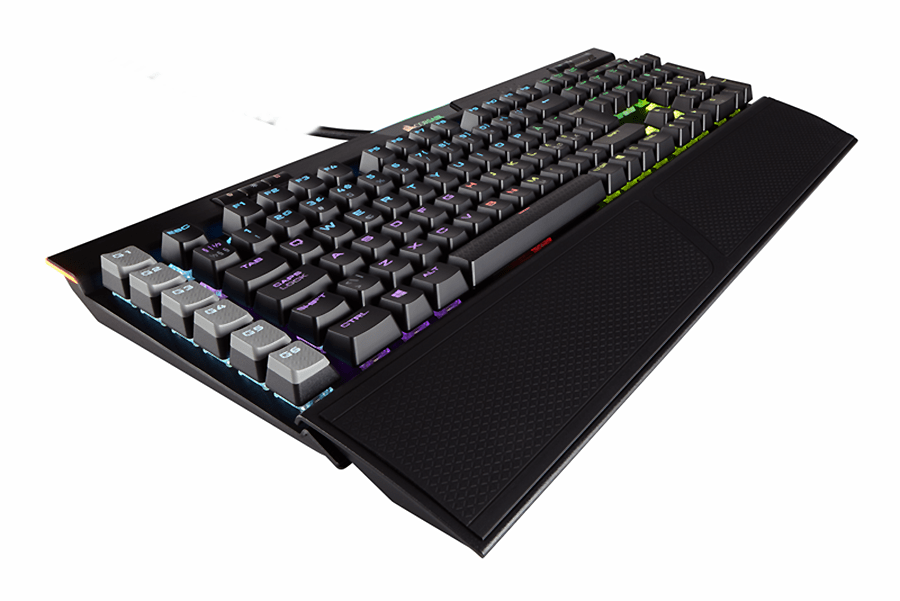 Gamers have a very specific set of needs and expectations for a keyboard, and finding a one that’s also good for getting some work done isn’t always an easy task. Corsair’s K95 RGB Platinum strikes a good balance, however, and is a top pick of both PC Gamer and PC Magazine. It’s big and will take up a fair bit of desk space, but it has dedicated media and macro keys, a volume wheel, a removable wrist rest, and even a cable management system underneath. Most importantly, its highly precise Cherry MX Speed Silver switches will ensure fast and responsive keystrokes when you need to react quickly or be outgunned in your favorite FPS. 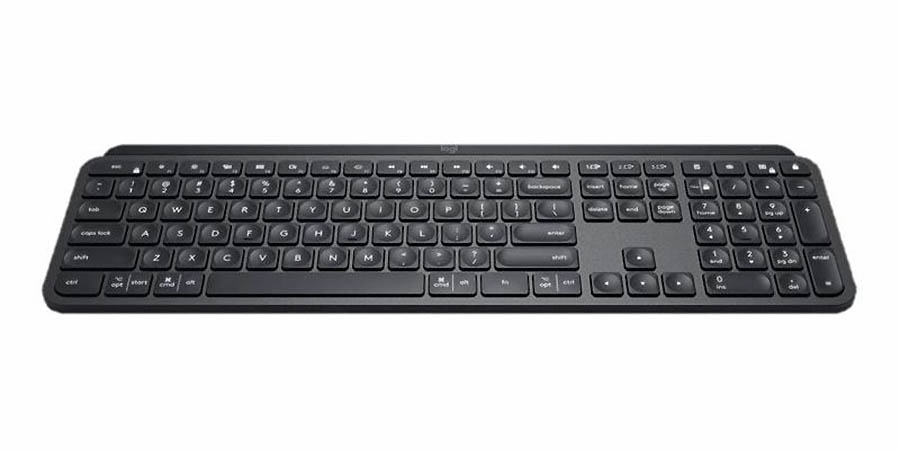 Disclaimer: A slim keyboard more akin to those on a laptop won’t satisfy folks who prefer the clicky, tactile feel of a mechanical keyboard. But there are plenty of good options if you’re looking for something that’s a little quieter for an open-office environment. Logitech’s MX Keys is a bit pricey for a non-mechanical keyboard, but both PC World and Digital Trends found it to be easily worth its $100 price tag, offering a streamlined design and sturdy, high-end construction, along with plenty of key customization options. It also has the ability to connect to multiple devices simultaneously, making it a powerful pairing with Logitech’s matching MX Master 3 mouse. 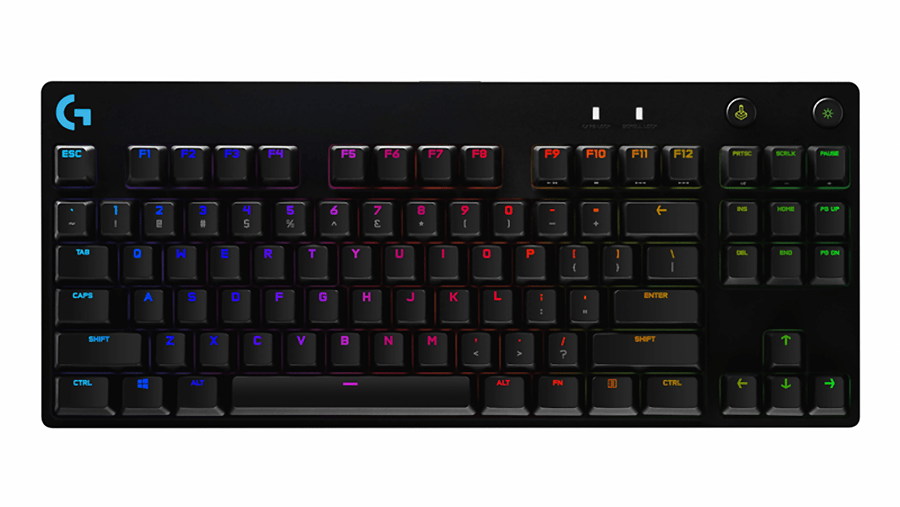 Most of the time, upgrading a keyboard simply means replacing your old one with a completely new one. Logitech’s G Pro X gives you another option, though. It lets you swap out the entire key switch mechanism (with no soldering or tinkering required), not just the key caps. That means if you decide you want to try out a clicker or more responsive set of keys in the future, you can order a whole new set and switch them out, then swap them back and forth as much as you like. As you might expect, that rarity of a feature does come at a bit of a premium—the keyboard itself is $150, and additional key sets are $50 apiece. As PC World notes in its otherwise positive review, however, those keys are also about the only selling feature of the keyboard, even if they are a big one. It has the RGB backlighting you’d expect from a gaming keyboard, but it’s a barebones, no-nonsense affair otherwise, with no wrist rest, media keys, or other perks. 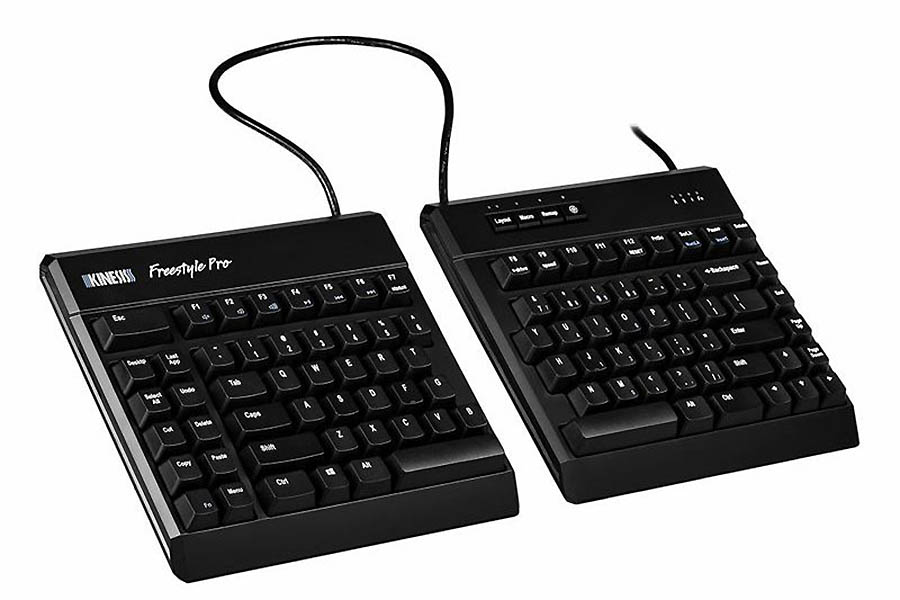 Keyboards with a split design—whether fixed in one position or completely separated into two halves—can take a while to get accustomed to, but they’re worth considering if you find that you’re uncomfortable typing for long stretches. The Kinesis Freestyle Pro goes even further than most with customization options that let you adjust and position the keyboard exactly how you want it, and even separate the two halves as far as 20 inches apart. If you’re a gamer, Kinesis also makes the well-reviewed Freestyle Edge RGB with more gaming-minded features, but the Freestyle Pro is a more streamlined (and more affordable) option for everyday use. As RTINGs.com explains, however, the keyboard is barebones, and you’ll have to shell out a bit more for an accessory kit if you want palm rests or additional tilting options. 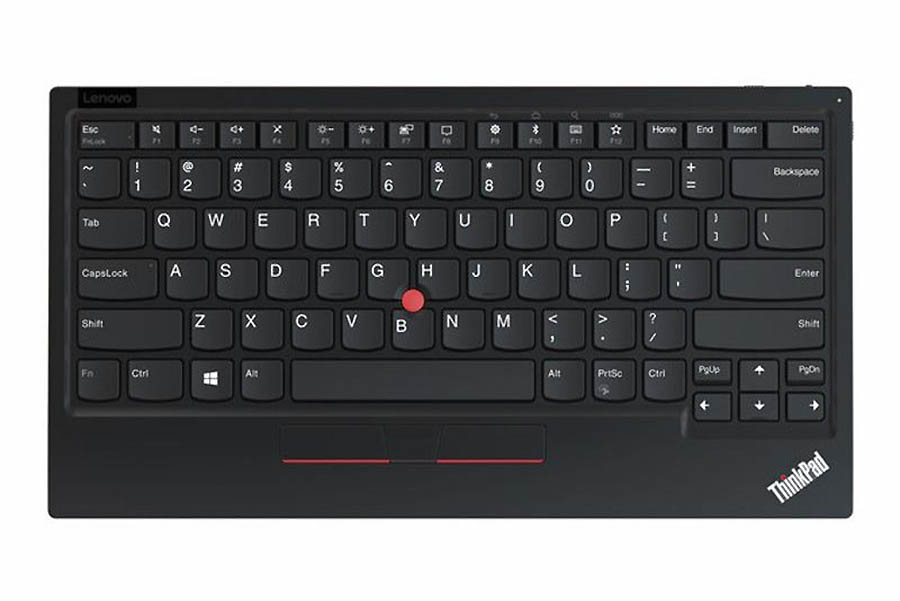 ThinkPad laptops have been known for decades as having some of the best keyboards around. And the TrackPoint Keyboard II is sure to please anyone who’s already a fan of them, or anyone who’s just looking for a compact wireless keyboard that doesn’t compromise on a great typing experience. It takes the familiar tactile-minded keys and trademark TrackPoint “nub” found on ThinkPad laptops and places them in a slim wireless keyboard that impressed both PC Mag and Laptop. Its compactness is also bolstered by some versatility, with both Bluetooth and RF wireless connectivity to let you use it with a range of devices (though Mac support unfortunately isn’t offered). It’s still essentially a laptop keyboard, however, which means that while it’s thin and lightweight, it could be a bit cramped to use as your sole typer if you’re doing a ton everyday. 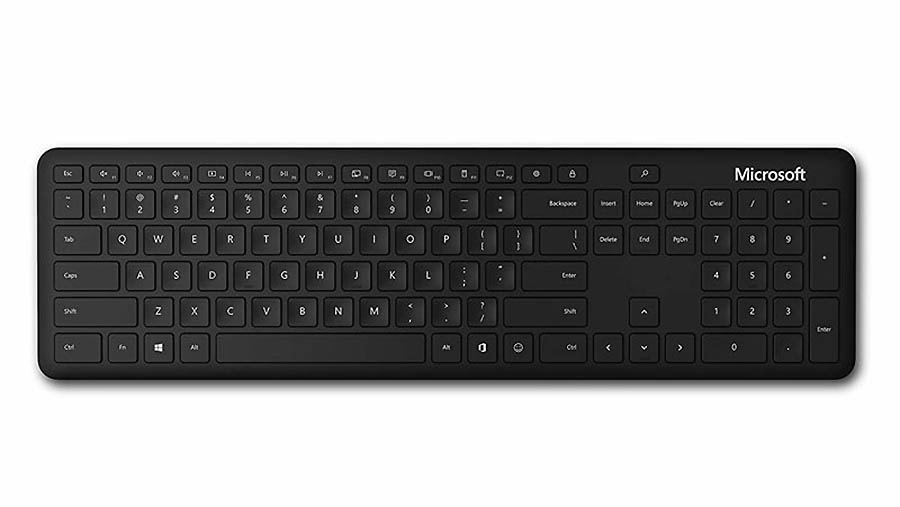 If you aren’t looking to shell out $100 for a high-end wireless keyboard like the Logitech MX Keys, then this Bluetooth model from Microsoft is a solid option. It’s sleek, with a low profile, and includes some added shortcut keys designed with Windows users in mind—like ones that let you quickly open individual Office applications. (The keyboard itself will work just fine with Macs or Android devices as well, though.) The Bluetooth is decidedly no-frills otherwise, but you can at least expect the keyboard to last a long time before you have to worry about changing its two AAA batteries. Microsoft says they should run for roughly two years with average use. And if you also need a mouse, you can get the keyboard in a bundle with one for just $10 more.