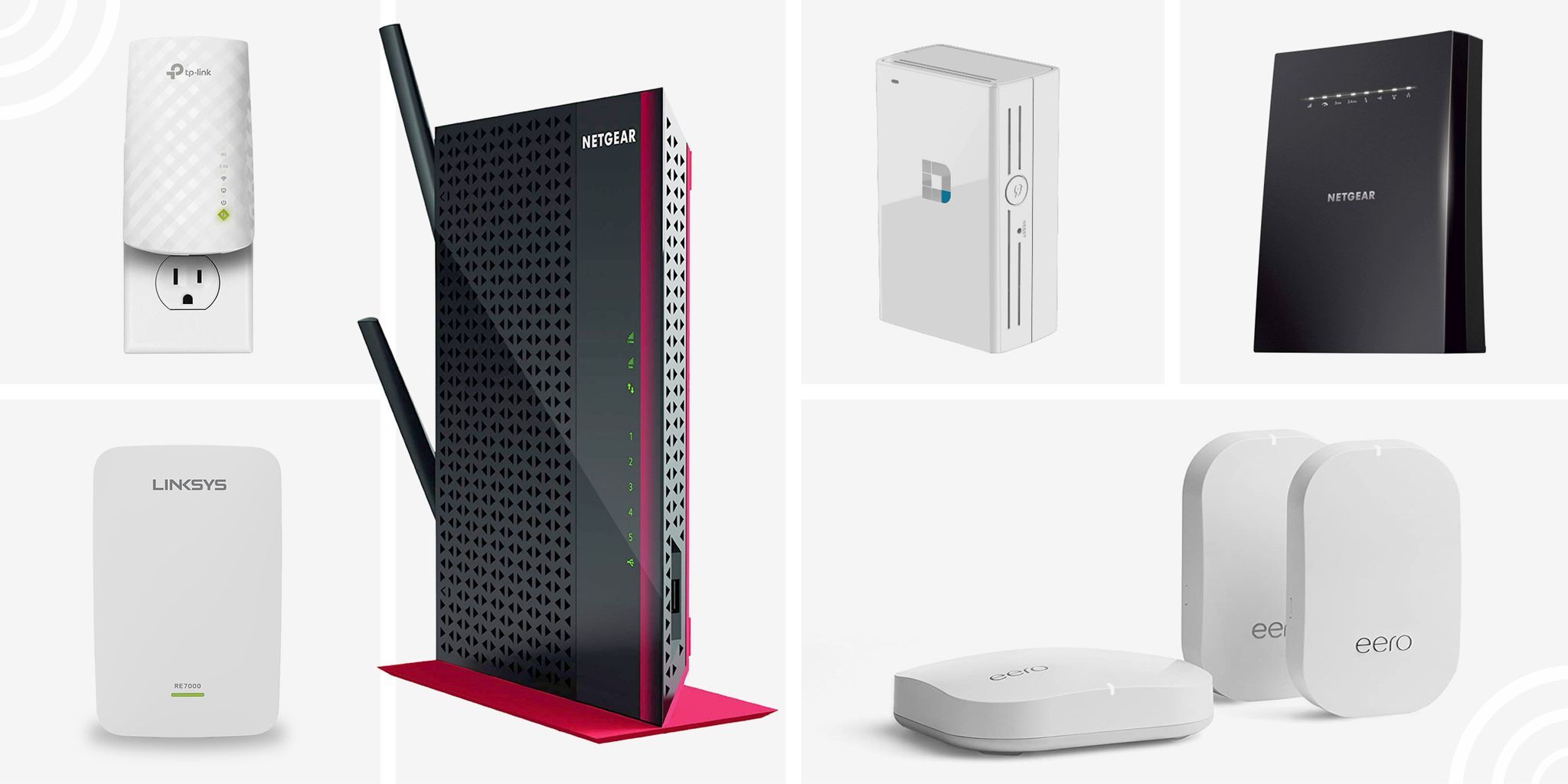 Even if you don’t live in a large house or sprawling apartment, you may still run into dead zones that make staying connected to the Wi-Fi a problem, which is even more important if you’re still working from home. A single router can sometimes struggle to provide complete internet coverage depending on your space’s layout and construction, or if there’s interference from nearby networks or other household devices.

If the problem isn’t just with your router, you’ll need to boost those Wi-Fi signals with a range extender. But if you have a really large house or an especially problematic space, you may want to look into upgrading to a mesh Wi-Fi network for the best results.

How to Tell if You Need a New Router or Extender

With lagging internet speeds, it can be difficult to determine whether your entire router needs to be replaced or if you can just opt for an extender. If your signal works fine close to the router, but drops off in certain areas like the basement, upstairs, or patio, then a cheap extender is likely all you need. An extender should simply be placed somewhere where it can reach the router’s signal, so that it can then rebroadcast it to cover more area.

However, extenders won’t be as fast as your typical router, and they can reduce your bandwidth further. If you find that your internet speed is subpar everywhere in your home, it may be worth revamping your entire system. In these cases, we recommend going with a mesh Wi-Fi system, which can replace your router and any extenders by placing the units around your home to create more seamless coverage without any separate networks. As mesh systems become more popular, they’re becoming more affordable too—though new systems will still cost much more than the average extender. In addition to the six standard extenders we recommend here, we’ve also included three mesh systems at the bottom of this roundup that we’ve tested and recommend.

The Differences Between Extenders

Wi-Fi extenders can vary considerably in features and capabilities. The majority support 2.4-GHz and 5-GHz frequency bands and are known as dual-band devices, but some cheaper options are only single-band and use 2.4 Ghz frequency to transmit data. Typically, dual-band extenders provide a faster connection because they have more bandwidth and experience less interference, which makes them a better choice for gaming and video streaming. However, single-band extenders have a farther range that can provide better coverage in spaces with many obstacles, such as walls and furniture. Higher-end tri-band extenders, which feature two 5-GHz bands and one 2.4-GHz band, cost more but give you the best coverage with the least interference.

By the same token, you can also generally expect to pay more for extenders with more antennas, which you might or might not need depending on the size of your house or apartment. Antennas can be external or internal, and the more a device has, the better it’s able to pick up and transmit Wi-Fi signals.

Like routers, extenders are rated in different classes, such as AC750 and AC1200, where the number simply indicates the combined maximum speeds they are capable of supporting (measured in mbps, or megabits per second). They come in a range of different shapes and sizes, from small plug-in units that will largely go unnoticed to bulky, desktop-style units you’ll need to clear some space for.

How We Selected These Wi-Fi Extenders

To choose these Wi-Fi extenders, we surveyed the market, evaluated models based on coverage, speed, cost, and design, and tested a few ourselves. When we weren’t able to test the products, we relied on expert sources, including Tech Radar, CNET, and PC Mag, as well as customer reviews from various retailers like Amazon, Best Buy, and Walmart. 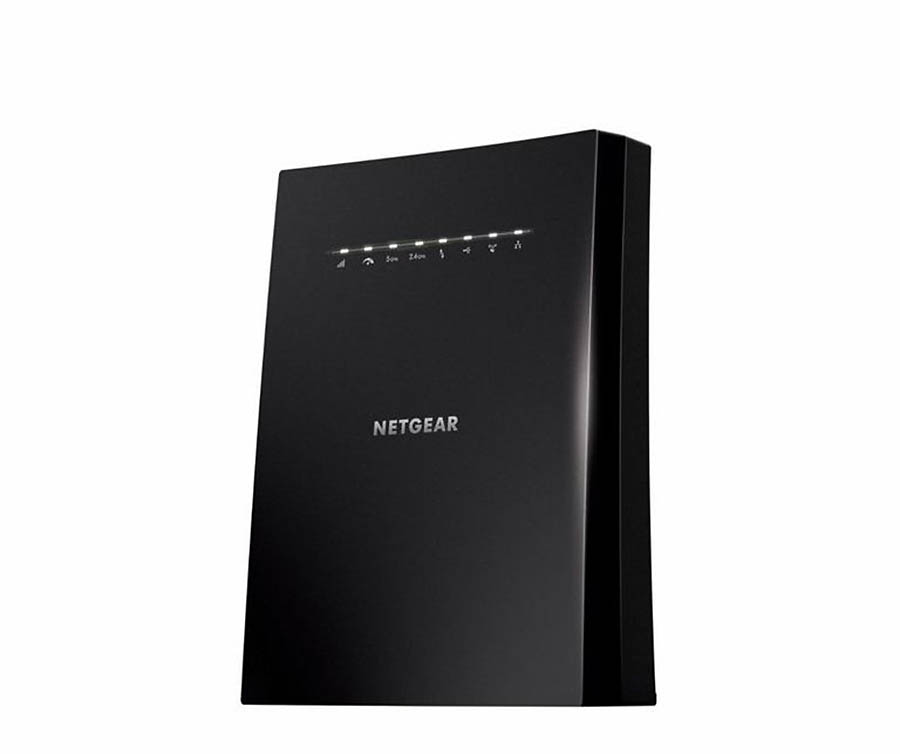 The Nighthawk’s huge size may rival that of a cereal box, but it holds six internal antennas, providing a strong signal and near-blanket coverage. It dedicates one of its three bands to communicating with the router, so there’s never any competition between the two. Netgear claims that the EX8000 mesh extender won’t reduce the existing speed of your router, and it also combines Wi-Fi coverage under one network name. Plus, its four ethernet ports allow for multiple devices to hook up to the wired connection. 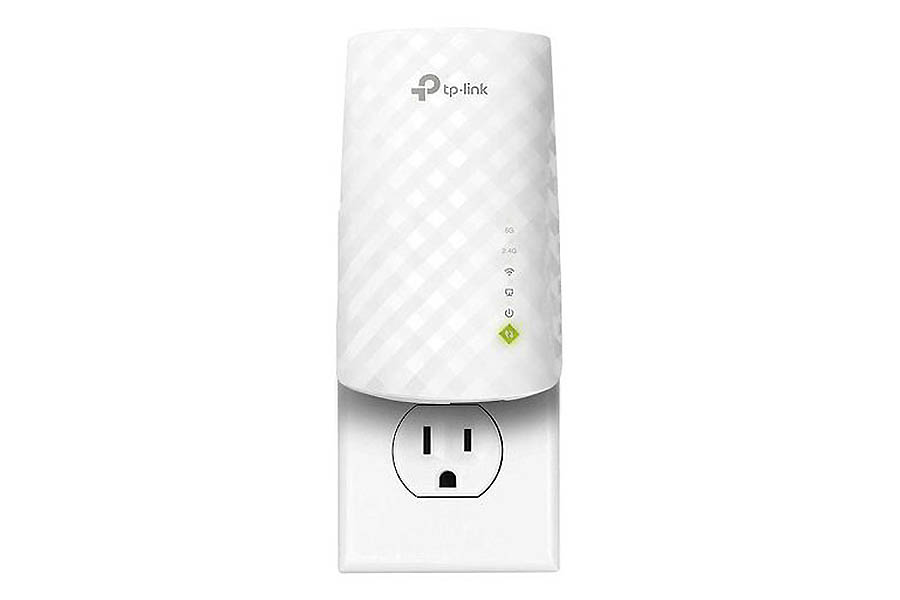 TP-Link’s RE200 was already one of the most widely recommended extenders around, and the company’s new RE220 model only improves on it while maintaining the same low price tag. It also keeps the same space-saving design with similar features as before, with three antennas and a dedicated ethernet port, but adds cloud-based app support for easier setup and configuration. The RE220 is universally compatible to any router, but also can function as part of a seamless mesh system when paired with the Archer A7 router. 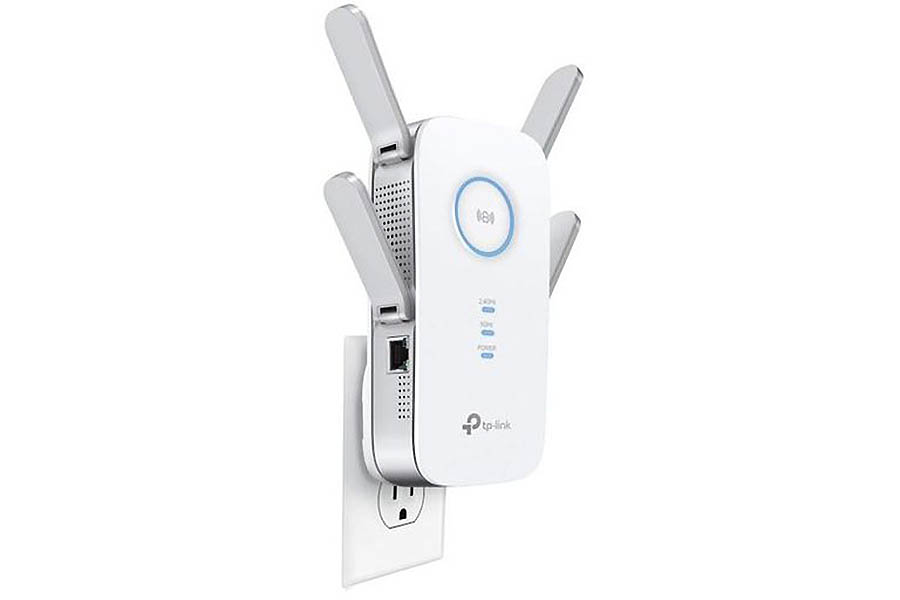 Many of today’s extenders are now discreet units that look more like a nightlight or air freshener, but the RE650’s four antennas make it clear that it’s broadcasting something. Though it’s bulkier and pricier than many other plug-in extenders, many reviewers such as PC Gamer and Tom’s Guide praise its performance and range of features, including AC2600 speeds and a gigabit ethernet port. Plus, it has a smart light indicator that helps you find the perfect placement if you’re unsure of the right area to put your extender. 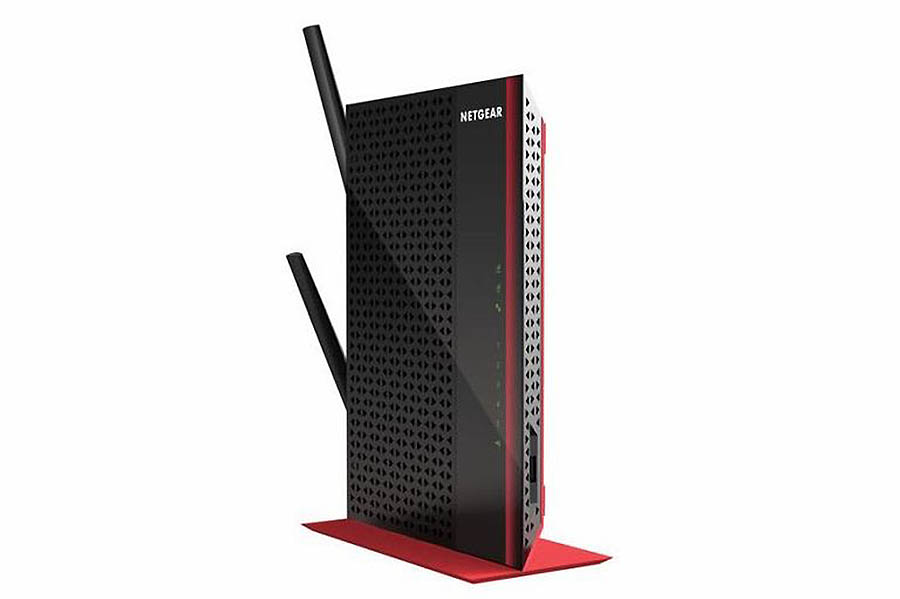 Ideal for video streaming or gaming, the Netgear EX6200 will match your gaming computer with its large but sleek and aggressive design. The dual-band extender features four antennas for powerful coverage with speeds up to 1200 Mbps, perfect for covering a few more devices—but not, say, 15—in a remote room or backyard. It also has an impressive total of five ethernet ports for when you need wired connection for devices like a hardwired printer, smart TV, or gaming console. 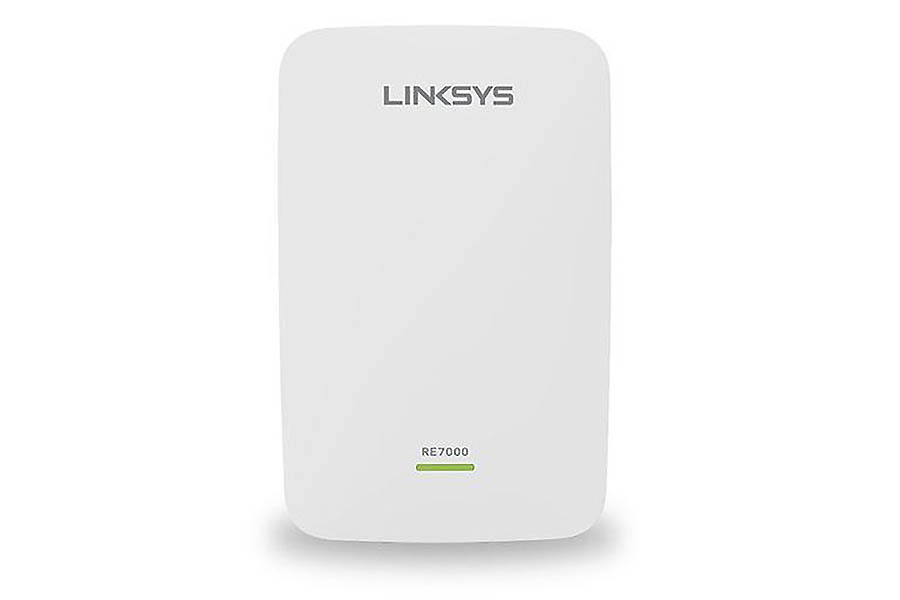 Wi-Fi extenders don’t get much more minimalist or inconspicuous than this one from Linksys, which makes for a great choice if your only placement option is somewhere particularly visible in your home. Despite its sleek, compact design, it doesn’t sacrifice on any features—including dual-band AC1900 speeds, an ethernet port, and promised coverage area of up to 10,000 square feet.

If you just need a boost in a distant room and don’t want to spend a lot of money, the D-Link DAP-1520 is an affordable, simple option. Just plug it in, hit a single button, and you’re all set. There are no wired ports, but many of us don’t need those anyway. But it does have a helpful app that lets you monitor your network traffic to see what—or who—might be slowing down your signal. 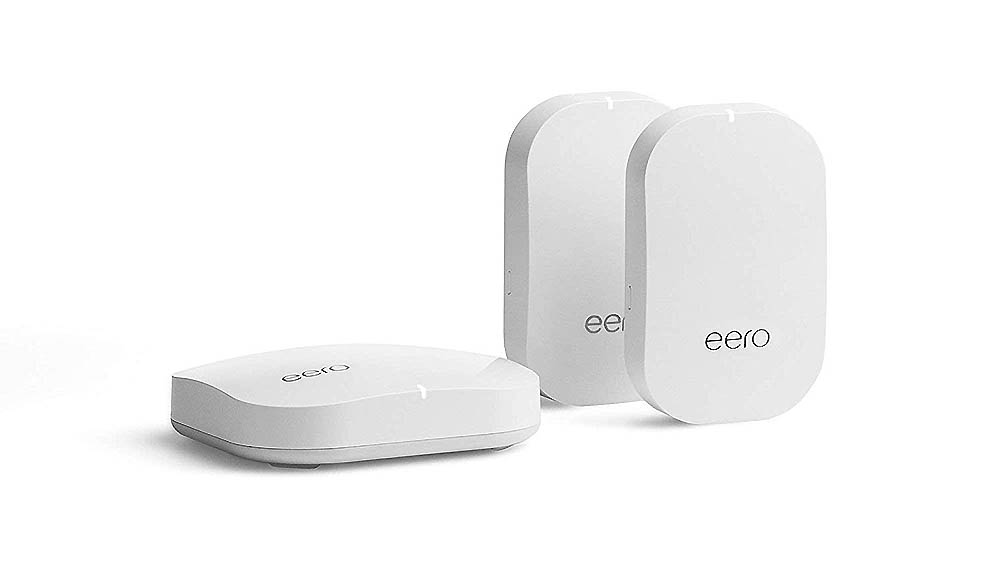 The Eero Pro is dead easy to set up: Simply connect it to a modem through the smartphone app and follow the app’s instructions. There’s no need for networking smarts, but know that the Eero Pro is a tri-band Wi-Fi network, meaning there’s just one network that connects devices at the speed they require. In a 2,900-square-foot stone house with two-foot-thick walls, we never had an issue with signal strength inside, but connecting on the patio or adjacent outbuilding has been problematic. After installing the Eero with one beacon near a window and another in the outbuilding, we had almost two acres of property covered, including a barn another 100 feet away.

This expansive coverage was impressive enough, but the power to manage the network through the app is another bonus. The app shows all connected devices and their status, so you’ll know if the kid is streaming Netflix or doing homework. If that’s a regular issue, you can even set schedules for certain devices to access the internet. While the Eero Pro with two beacons claims to cover a 5,500-square-foot home, if you don’t need nearly that much square footage covered, the standard Eero router for 1,500 square feet is a good alternative for much less. 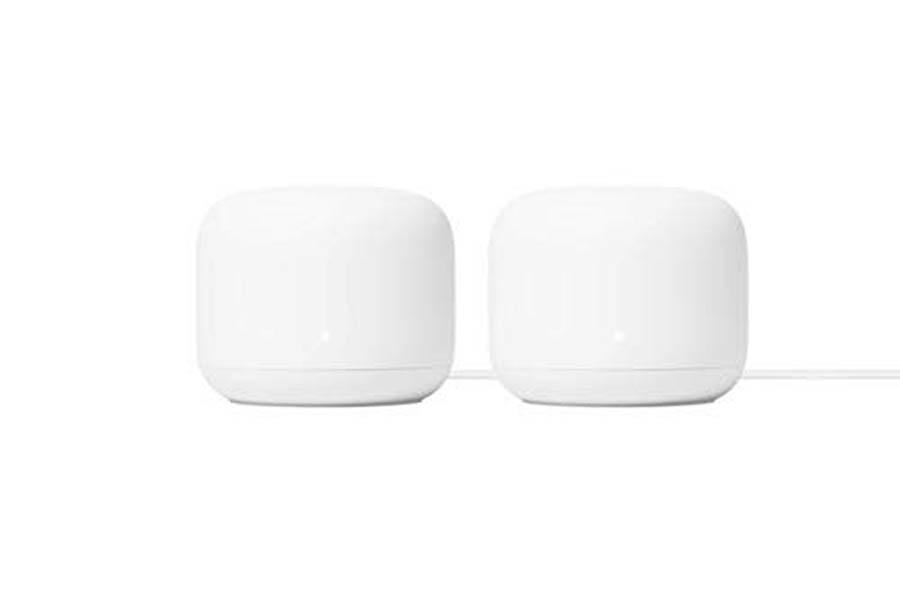 Although more expensive than most range extenders, Google’s Nest Wi-Fi is an appealing mesh alternative, which forms a complete system instead of secondary networks. Each hub, which Google refers to as points, doubles as a Google Assistant-powered speaker that can stream music or podcasts, control connected devices, and do a lot of other voice-enabled skills. If you’re already living in Google’s ecosystem, you won’t find a better Wi-Fi option. Setup is remarkably easy; it took us less than 10 minutes from unboxing to surfing on our new network.

Performance is great, too. Google says one router and point covers up to 3,000 square feet, which proved accurate in our testing, delivering very fast internet download speeds to areas of our test home that were out of reach with a single router. Our speed test showed download rates of 201.6 mbps a foot away from the router, 195.2 next to the upstairs hub, and 161.8 in a distant upstairs bedroom, about 45 feet away from the hub. Speeds dropped to 81.5 mbps at the point in the house farthest from a router or hub (about 70 feet), but that’s still fast enough for streaming movies and Zoom video conferences. 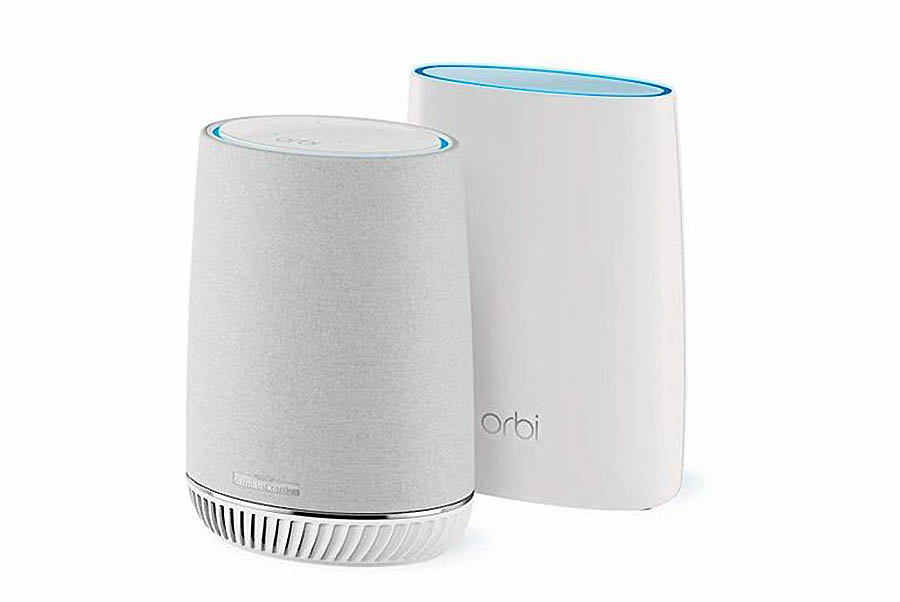 The whole Netgear Orbi RBK50V system claims to cover an impressive 4,500-square-foot area with one Orbi router and a satellite that also functions as a smart speaker with built-in Alexa. If you already have a router and just want to add the satellite as a two-in-one extender and smart speaker, it’s rated to cover an additional 2,000 square feet with speeds up to 2.2Gbps. If you already have or don’t want a speaker, Netgear also offers Orbi satellites in desktop, wall-plug, or outdoor tabletop versions depending on your needs.

In our testing, this tri-band mesh system seems to be providing consistent, if not faster, internet. For instance, we’ve been able to connect an Amazon Fire TV direct to the network and stream Netflix, Amazon Prime, and HBO Max without any lagging or buffering. When downloading some large 30+GB files to a Playstation, its download speed wasn’t particularly quick, but it was steady, whereas in the past, the modem would struggle with the files and cause long pauses during downloading. We also felt like the setup instructions could have been clearer. For instance, it explains what cord to plug into the router, but not to plug the other end into your existing modem, so clearer instructions could have saved some time.