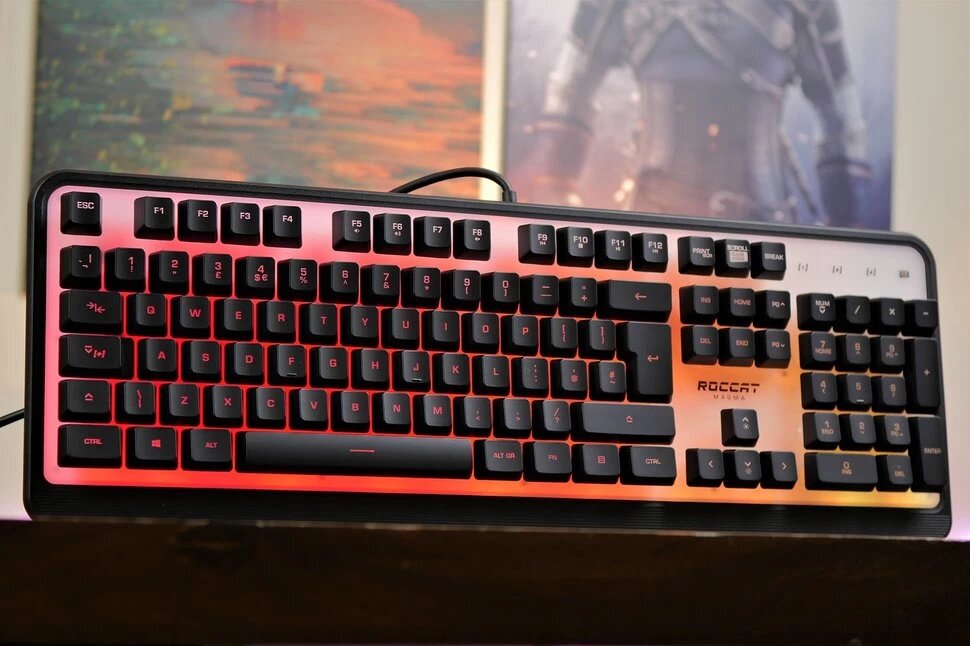 A surprisingly good gaming keyboard for the price. It’s comfortable and easy to use, while also offering satisfying RGB lighting and decent features.

Yet that’s what the Roccat Magma offers. It’s a delightful-looking membrane keyboard with plenty of features that gamers will enjoy beyond the RGB lighting. Can it do no wrong?

Unlike a lot of other RGB backlit gaming keyboards, the Magma uses a combination of 10 discrete LEDs, a five-zone lighting setup, and a semi-transparent backplate to maximise RGB lighting – all while keeping cost down compared to those with more considerable lighting tech where per-key illumination is possible. 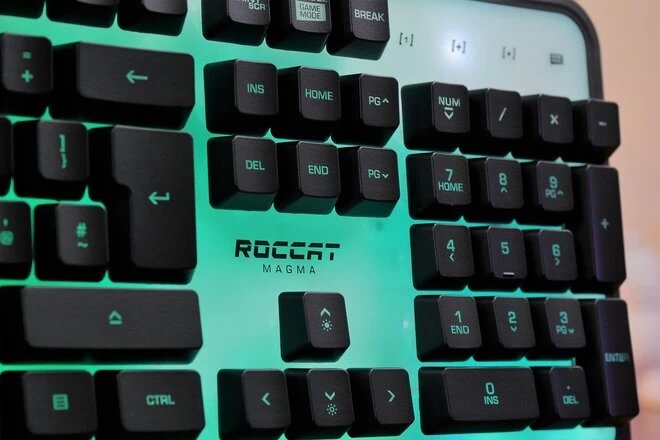 The result is certainly visually appealing. That backplate alone allows for a nice glow from the keyboard both day and night. The Roccat AIMO intelligent lighting also emits a satisfying visual experience as the keyboard gradually changes colours throughout the day.

As we’ve said, though, this keyboard doesn’t offer per-key RGB illumination. Instead, the light glows through that backplate and then through the keys. This looks great for the most part but does have its downsides.

We noticed, for example, that you can see darker areas on the keycap lettering where the lighting just isn’t getting through when you’re sat at an angle at your desk. Look straight down at the keyboard and it looks fine, but leaning back in your chair you’ll soon spy some darker areas. There are also dark spots on the transparent backplate too, where that’s attached to the keyboard itself and the light doesn’t pass through. Both small complaints, but something we couldn’t unsee once we’d picked up on it.

That said, we generally don’t like zone-based RGB lighting. Often it feels jarring, but in the Magma’s case it’s done well and offers some nice transition effects. If you have other Roccat peripherals it also matches up with those and adds a satisfying wider glow to your desk. 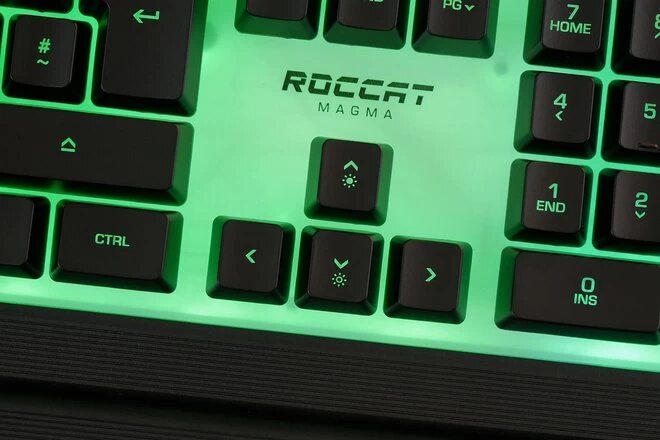 There are just a few lighting modes to choose from that include wave, fully lit, heartbeat, breathing, and fade FX. These can be customised in the colour they emit, brightness, and speed. You can also customise the colour of each of the five zones.

But for us the most satisfying lighting comes from AIMO intelligent lighting. This gives an “organic” lighting experience that changes according to the apps you’re using and devices you have plugged in. We’ve always been a fan of this lighting mode and it continues to please on this keyboard.

Aside from the RGB lighting, the Roccat Magma pleases in other areas. It’s a comfortable-to-use membrane keyboard that’s as easy to use for working as it is for gaming. 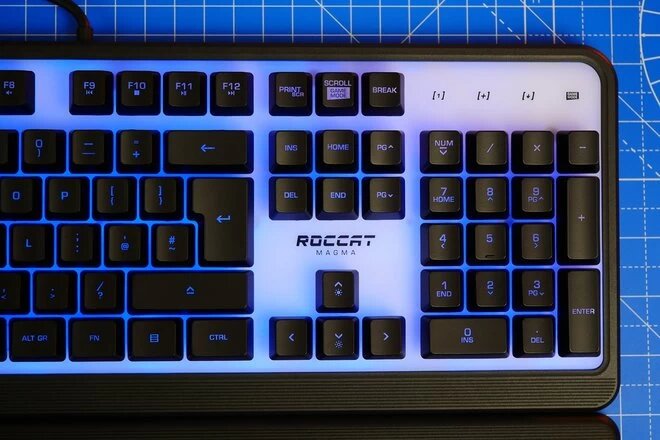 Generally speaking, membrane keyboards don’t have a super-fancy key switch setup. You don’t get the actuation differences that you’d get in a mechanical or optical-mechanical keyboard, but you do get a silent keypress. The Magma’s keys are quiet enough to not get picked up by your mic when you’re streaming on Twitch or on a work Zoom call.

They’re also smartly designed with advanced anti-ghosting technology with 26 key roll-overs. That means you can mash as many keys you’d reasonably use during gaming and have all the keypresses registered. We found this accurate enough to use for a fast-paced gaming session and the comfort of the membrane keys cannot be overstated for long-term use.

There are a few extra buttons buried within this keyboard for easy access to some settings. Press-and-hold the function (Fn) key and you can then use media controls buried in F9 to F12 and volume controls in F6 to F8. You can also turn the lighting up and down using the directional arrows, but there’s not much else on the surface. 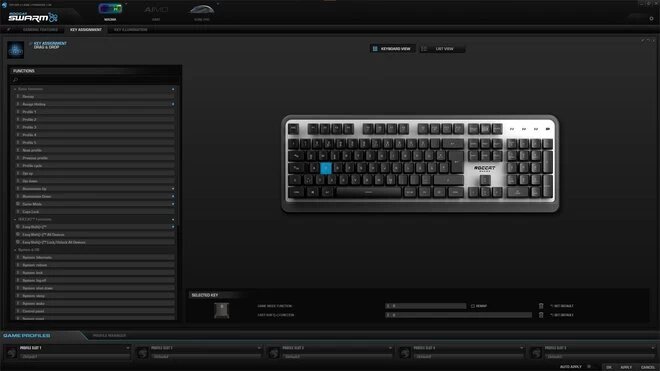 Download the Roccat Swarm software and the Magma becomes a lot more powerful though. From there you can customise the keys and remap them with different key-presses, add specific actions (like launching an app or browser for example), or add a secondary action for Easy-Shift.

Easy-Shift is where this keyboard shines. Activate game mode by pressing the Fn+Scroll Lock button and the Caps Lock transforms into a more useful key. Once in this mode holding Caps Lock means you can access a secondary action that you’ve assigned to other keys.

This might include a remapped button, a hotkey, or any other action. This gives you quick and easy access to other settings with the press of just one extra button. It’s really useful, especially if you have different profiles setup for productivity, gaming and other things.

One thing that’s sadly lacking is macro recording. You also can’t re-programme every key on the keyboard. 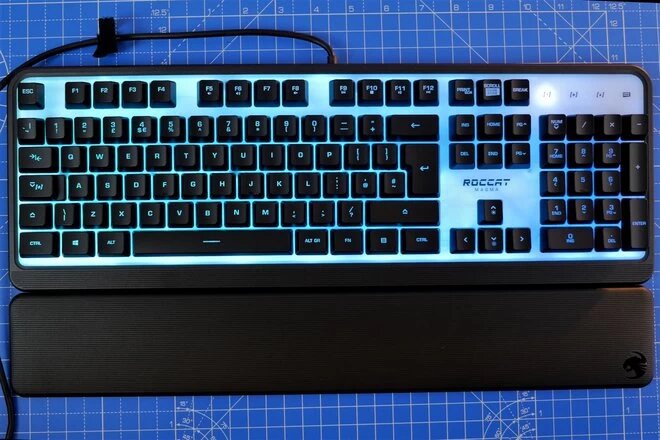 Aside from the key setup and software highlights, the Magma is also good for other reasons. It comes equipped with a textured, detachable wrist rest. We honestly thought that palm rest was going to be uncomfortable as it’s plastic, has no padding and has some ridge effect on it. Yet it’s actually proved very nice under daily use, helping to keep our hands in a comfortable position and alleviate any discomfort issues that might otherwise occur. It does, however, attract dust and debris like crazy but it’s also easy enough to clean with a quick wipe.

Cleaning ease is another highlight of the Magma though. The membrane design means it features raised housing where the keycaps sit. That design, along with the transparent backplate, makes it easy to dislodge hair, dust and debris from the ‘board. What you can’t wipe away can be blown out with some compressed air or just a good hard puff from your lungs. It’s not waterproof or anything fancy like that – but should be easy enough to keep clean.

All told, the Roccat Magma is a surprisingly good gaming keyboard for the price. It’s comfortable, easy to use, all while offering some satisfying RGB lighting.

There are some minor issues with the design, including limits to RGB coverage and no per-key illumination, but we’re happy to forgive such things when taking the entire feature set into account.

If your favourite thing about gaming keyboards is RGB lighting and you like the idea of a quieter membrane keyboard then the Roccat Magma is worth considering.